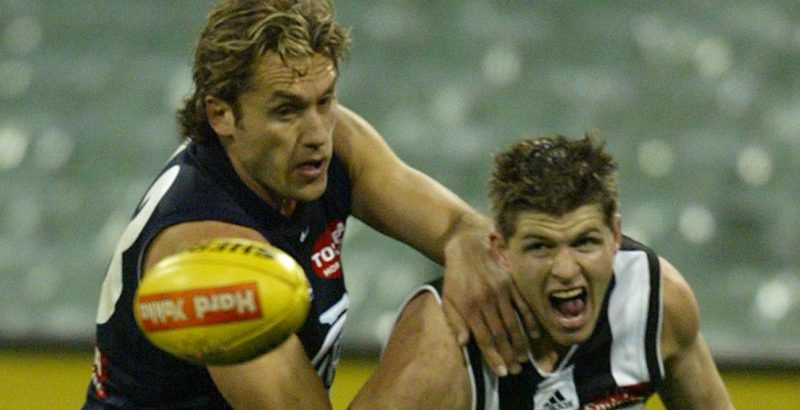 Carlton finishes on a high

The consolation prize, after a wrestle worthy of a far more meaningful encounter, went to Carlton by a point. 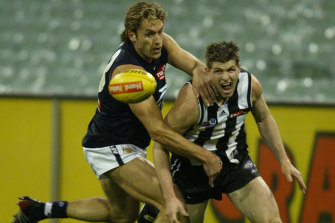 The Blues, inspired by resurgent captain Anthony Koutoufides and engineered by the ever classy Matthew Lappin, will embark on the post-season wake with more to celebrate than traditional foe Collingwood, whose season was buried in front of 60,898 fervent supporters at the MCG.

The last rites appeared to have been delivered by Heath Scotland in the dying minutes of both team’s seasons, when he accepted a pass from Nick Stevens and put through a set shot to extend the Blues’ lead to 13 points.

Earlier, two emerging stars had combined when Andrew Walker made a brilliant pick-up and handballed to Jarrad Waite, who had ignited the Blues in the second half and kicked two rousing goals. 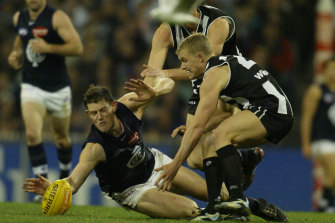 Barnaby French dives for the ball as well as Collingwood’s Takyn Lockyer.Credit:Sebastian Costanzo

But Collingwood had not quite finished. After a late goal to Brodie Holland, and a free kick against Brendan Fevola that led to Chris Tarrant kicking his fifth with a minute remaining to make the margin one point, the Blues managed to hang on and record their 10th win of the season.

Coach Denis Pagan was delighted, but warned Carlton’s work was not done. “We fought it out. Our spirit was enormous and there were some really good efforts by some of our young players,” Pagan said.

“It was good to finish on a good note, with three wins out of four. We know we’ve got a good platform to launch ourselves. It’s going to be a hell of a lot harder next year and I don’t want all our supporters to think we’re going to win the flag next year. It’s going to be tough.” 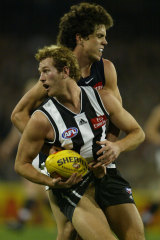 The result ensured Collingwood would have to make do with eight wins, having lost its last three matches badly in a dismal end to the season that completed a dramatic fall from its consecutive grand final appearances. The Pies will finish 13th, above only the Bulldogs, Hawthorn and Richmond.

Carlton kicked the last four goals of the third term to lead by four points at the break, after Koutoufides kicked two long goals to get his team back in the game.

Despite his promise last week to keep Nathan Buckley out of the centre square and leave the work to the second-string onballers, coach Mick Malthouse started the captain in the middle. But he was shaded by the vastly improved Jordan Bannister, and Malthouse revealed Buckley had been labouring with an injury, the nature of which he would not reveal, for the past month.

The match started ominously for Carlton when Tarrant quickly got the better of Luke Livingston and Leon Davis proved too elusive for Ryan Houlihan. Livingston was quickly replaced by the accountable Bret Thornton, and Houlihan recovered well.

Up the other end, Fevola was hot and cold, but had the poise to kick three important goals when it mattered. For Collingwood, Paul Licuria was among the best with 36 touches, by the far the most on the ground.

Lappin swept across half-back and set up countless attacks for the Blues, who now know they have something to work with in their cobbled-together list, about to be remodelled again with an injection of youth.

The loss, Malthouse said, reflected a frustrating season. “That’s the way we’ve generally been,” he said. “Nearly is not good enough. That’s in a nutshell. Overuse (of the ball) is sometimes lack of confidence, it’s looking for Anthony (Rocca) who hasn’t been there for several weeks, so it’s no excuse.”