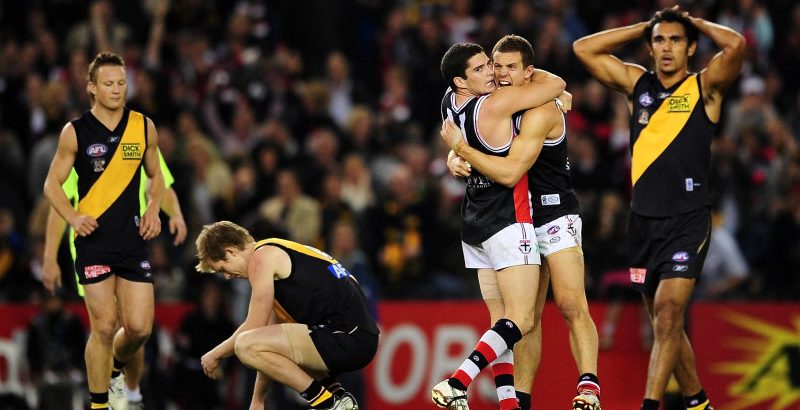 IT CAME down to the last kick. Fittingly, after an incredible match, after the siren. And the ball was in the hands of a Riewoldt. 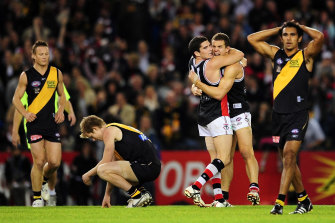 Unfortunately for St Kilda, the christian name was Jack, not Nick, even if the mark that led to the final act was a trademark of his cousin, who was sitting on the bench with a damaged knee.

After showing again that he is a genuine player of the future, the younger Riewoldt loaded up from 53 metres. But with his legs spent, the connection of boot on ball was not great and the shot fell short.

The Saints – with only two fit men on the interchange bench for much of a furious last quarter – thrust their arms in the air. They’d snuck home by three points. 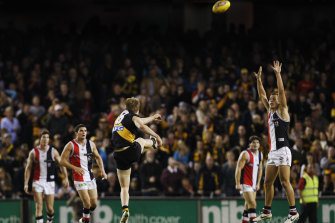 Jack Riewoldt launches into his kick after the final siren.Credit:Vince Caligiuri

In some respects, the Tigers deserved to pinch it, if only because it was a shame to see another close match slip through their grasp. Not to mention they had pretty much dominated the Saints for much of the night, but let themselves down with poor disposal.

Equally, of course, the Saints deserved their win. After a less than inspiring start to their season they finally showed the sort of grit their fans want to see. 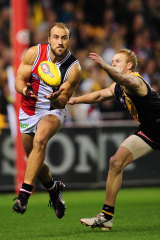 While the tall timber in Fraser Gehrig, Riewoldt, Michael Gardiner and Justin Koschitzke had less impact than Ross Lyon would have hoped, Stephen Milne was back to his brilliant best, bagging seven goals in a match-winning performance. Three of those goals came in the final term as the Tigers charged.

At the other end however, Matthew Richardson – after playing the majority of the game roving all over Telstra Dome – almost did enough to get his side over the line singlehandedly.

The big fellow added to this with one of the marks of the season. In the last term, running full tilt, he took a genuine “specky” through and over a big pack of players.

Within the first few minutes of the final term, St Kilda looked to have sealed the match when Milne booted two goals. But the Tigers fought back and Nathan Brown’s brilliant snap 17 minutes in somehow put them ahead by a point.

Milne then grabbed his third, fending off Chris Newman to give the Saints a five-point buffer and from there it was thrilling end-to-end football as both sides tried in vain to conjure a lethal attack. 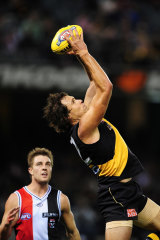 Tiger Kelvin Moore had the chance to steal the match with one minute left on the clock, shooting from 45-metres out. St Kilda fans breathed again when his shot crashed into the left-hand goal post.

From the kick out, St Kilda cleared the ball on the wing and it appeared as if that was the end for the Tigers. Yet with only 15 seconds left there was one last tilt – Nathan Foley breaking the lines and firing the ball to Riewoldt.

The Tigers will be kicking themselves for poor use of the football in the first half that kept St Kilda in the match. They were often superior in the endeavour department, were working harder and were slaughtering St Kilda in hard-ball-gets (66-28 for the match), but undid their good work with wasteful use of the ball.

The Saints, despite having less of the ball – 77 less disposals for the match – were better in finding targets most times they went inside 50. 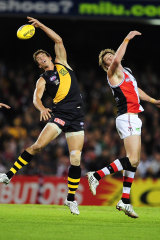 Trailing by 11 points at half-time, the St Kilda players gathered in a tight huddle at half-back before the start of the third term. There was a fair chance they were just taking a quick second to clear their heads after the roasting they would have received in the change room from the coach.

But whatever was said there or by Lyon spurred them into the type of action they had threatened, but failed to deliver, in the first half.

They won possession at will and with five unanswered goals erased the deficit and set up a three goal lead that the Tigers did not look capable of recovering from.

Nick Dal Santo, as he was all night, was a driving force, Robert Harvey also was good, while Raphael Clarke, who in the final term injured his hamstring, was proving plenty of run. But as they have done all season the Tigers refused to lay down and came back with three goals to Richardson and Morton to somehow go into the last break a point ahead.

As it turned out, it needed to be four points.

The Saints will be buoyed by their gutsy effort, the win entrenching them in the eight with Collingwood their opponent next week.

THE Saints may have prevailed in a gritty effort, but the unheralded Tigers showed last night that they were vastly underestimated coming into this season, taking the game right to the wire.

THE wounded Saints. Nick Riewoldt was taken down in a late tackle by Luke McGuane 11 minutes into the third quarter and left the ground soon after with a knee injury, taking no further part in the game. Xavier Clarke was also forced out of the game with a hamstring injury in the final term.

STEPHEN Milne was the man with the answers in the Saints′ forward line last night, kicking seven goals, three of those in the final term when the game was on the line. Fraser Gehrig may be re-thinking his decision to return to football after another lacklustre performance, getting only five possessions and kicking one goal.