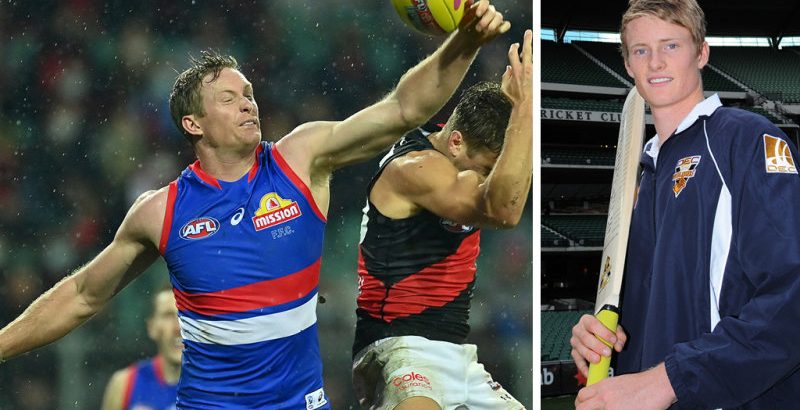 One of the keys to a Bulldogs premiership on Saturday did not play a game of footy for more than six years in his prime. That was when Alex Keath was trying to establish a first-class cricket career.

In one way, it held him in good stead. “Unfortunately, the best part of my cricket journey was my fielding,” he said. “That’s a bit of a waste when you’re a professional cricketer. It’s all about runs and wickets.” 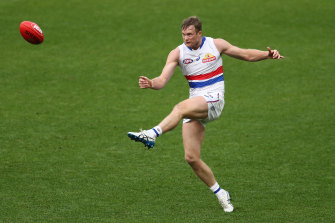 Alex Keath in action for the Bulldogs.Credit:AFL Photos

Keath said he did not produce quite enough of either, but stayed fit and mobile in the field. Besides, a footy was never far away. “Cricketers love getting the Sherrin out in the warm-up and telling you how good they are,” he said.

Cricket still echoes in Keath’s footy life. When he missed a set shot on a rare sally forward in the semi-final win over Brisbane, former Victorian captain Cameron White was quick with a text and some goalkicking advice. “I told him I might leave that one,” Keath said.

As a boarder at Melbourne Grammar, Keath played alongside Steven May in an APS footy premiership. “He was the gun forward. He was only in year 10, but he used to take care of the year 12s,” Keath said. “I was a skinny, spindly wingman. I was very much an outside player.”
They played together on the MCG that year against Scotch College in the annual Cordner-Eggleston Cup match. 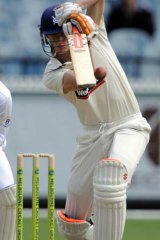 Keath was one of 12 priority 17-year-olds taken by start-up Gold Coast, and coach Guy McKenna and recruiter Scott Clayton promised him a place in their inaugural AFL game. May would be alongside him. But in the same year, Keath played as an all-rounder in Australia’s under-19 World Cup cricket team with Josh Hazlewood and Adam Zampa, and under the captaincy of Mitch Marsh. They won.

When he announced later that year that he was signing a three-year deal with Cricket Victoria, it was considered a coup for cricket, which mostly lost these heart/head tussles to footy, where there were more professional openings and more money on offer, sooner. Keath said that did not enter his thinking; he followed his heart. Granted permission to see the schoolboy footy season out, he promptly broke his collarbone.

That was in 2010. For the next five years, Keath toiled away on the cricket treadmill, playing seven first-class games for a strong Victorian team, as well as some one-day and BBL matches, and won three premierships with Melbourne. The Albert Ground remains his favourite sporting venue. 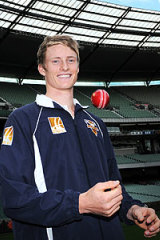 A teenage Alex Keath on the day it was announced he had signed a long-term cricket contract.Credit:Vince Caligiuri

He said he cherished all that cricket gave him, and blamed no one else when it led into a cul-de-sac. “There were a lot of frustrations with my personal performance,” he said. “I just tried to get the best out of myself.”

Footy remained at arm’s length. Gold Coast kept him on their list for a while and McKenna stayed in contact, but he spent two winters at the cricket academy in Brisbane under the tutelage of Troy Cooley and the next three playing club cricket in England. “I’d wake up early, flick on ESPN to watch the Friday night game before going off to cricket on the Saturday,” he said.

When Cricket Victoria did not renew his contract in 2015, Keath signed with Adelaide club Prospect. He was still intent on a cricket career, but the Adelaide Crows offered him the chance to train while playing cricket. As luck would have it, Don Pyke, who has a strong cricket history and connections, had just become coach.

His fallow footy years now worked in his favour. Having not been registered with a club for the preceding three years, he was a category B rookie, free to sign with anyone. 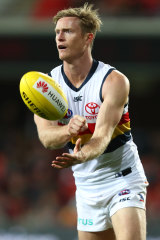 Keath had Prospect and prospects, and it relaxed him. “I had probably had my best 12 months of cricket after I finished up as a pro player,” he said. He was named in the Adelaide club team of the year. Alongside him was Alex Carey, another cricketer with a football pedigree.

Meantime, Keath’s footy was re-gathering. “It was a challenge to start with,” he said. “You go from 0 to 100 in an AFL environment. They looked after me. They treated me like I was injured, training mainly with the rehab group. I was very much depth at that stage.”

Keath impressed enough to be made co-captain of the Crows’ SANFL team. Injuries then opened up a senior place near the end of 2017, a grand final year for the Crows, as fate would have it alongside Jake Lever. He did not play finals that year, but when Lever left for Melbourne the next year and as tumult overtook the Crows, he quietly cemented a position and made a name for reliability.

By the end of 2019, home called and the Bulldogs appealed, and Keath has barely missed a game these past two seasons. The skinny, spindly wingman from the APS is now a bulkhead on the Bulldogs’ back line, possibly two playing hours away from an AFL premiership. In the way footy circles on itself, it’s either him or May and Lever.

Keath says the cricket itch is scratched. “I’ll always enjoy keeping an eye on the cricket,” he said. “I’d love to play again once I’ve finished footy. But from a higher-level playing point of view, it’s something I’ve had a go at. I’ve got fond memories of great experiences.”

This week, instead of pinching singles to mid-wicket, he is pinching himself. Well-wishers have swamped him, including McKenna, who, to add to the many twists, now works for Cricket Victoria.

“Playing my first AFL game felt like a great achievement,” Keath said. “Personally, it was a journey just to get to that point. To play finals is a bonus. To play in a grand final would be just amazing.”