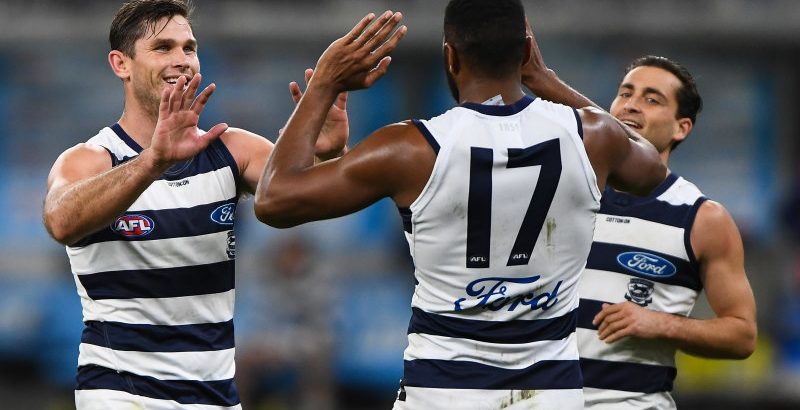 Geelong handed Fremantle a brutal reality check in the wet and on their home deck, registering a dominant 69-point win on Thursday night.

The victory puts the Cats briefly on top of the ladder on percentage with the Western Bulldogs (four points behind) and Melbourne (equal on points) still to play this round. They were 5 per cent behind Melbourne on percentage going into the match and ended it in front, 130.3 to 129.9. 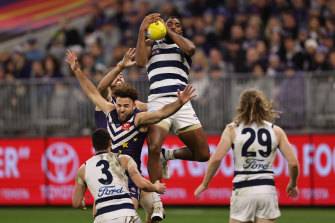 Chris Scott’s men landed in Western Australia on Wednesday not long after the government enforced a 14-day quarantine requirement for Victorian arrivals, and after testing and isolating (except for training and the game) they weren’t rattled.

They put in an expert dismantling of the Dockers, nullifying their dangerous midfield, making their defenders look all at sea and reducing Fremantle’s aerial threats and small goalkickers into blunt attacking instruments. That they played so precise in the wet was even more impressive.

Geelong took a staggering 137 marks to Fremantle’s 65, and an even more absurd 28 marks inside 50 to their opponent’s two. It didn’t help Rory Lobb was substituted out with an ankle injury but he wasn’t looking threatening regardless.

The game began in a subdued manner with both sides battling to convert chances into goals but once the Cats found their range via a Brad Close set shot from wide and long they didn’t look back, save for a couple of quick Freo goals early in the third term. 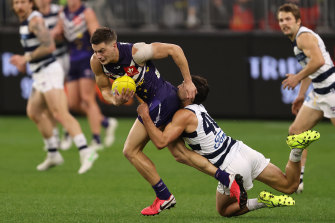 New to the top eight, and with a team full of promising youth and some exceptional veterans, it seemed somewhat logical to suggest Fremantle could challenge Geelong in the Thursday night slot on their home deck. It was painfully clear for Dockers fans this would not happen.

The Cats had put in a defensive masterclass; folding off their opponents to help teammates in the defensive 50 (Tom Stewart had eight marks to half-time), pouncing on turnovers quickly and efficiently and denying Freo the corridor.

Sean Darcy had put in a stellar performance for the Dockers in the ruck but that was about where it ended. His midfield, particularly David Mundy who has thrived again this year, did not have a clearance in the first half. Darcy ended the game with an injured knee.

Meanwhile in the Cats forward 50 Tom Hawkins was dominating. He was getting good isolation and was too strong and smart for Alex Pearce. Despite being inaccurate, Patrick Dangerfield also proved a handful when forward, and dished out a nice pass to Quinton Narkle for his set-shot goal.

The deficit of 14 in contested ball at half-time, Freo trailing, was also alarming. 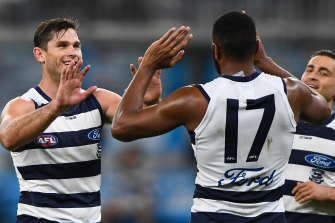 Tom Hawkins celebrates one of his four goals.Credit:Getty Images

MRO TROUBLE FOR DOCKERS?
Luke Ryan and Josh Treacy face nervous waits ahead of the Dockers next match against the upstart Sydney Swans side.

Ryan got Shaun Higgins in a sling tackle and while it seemed there was a dumping motion – which the AFL does not look lightly on – the Cat’s head did not slam into the ground.

It could have though. So will Michael Christian want to send a signal that such a tackle isn’t on, regardless of outcome?

Meanwhile, Treacy was bizarrely placed on report for a slightly late bump into the back of Jed Bews, who had just taken a mark. Seemed like not much in it, with Bews OK, but unusual it was deemed worthy of a match-day booking. 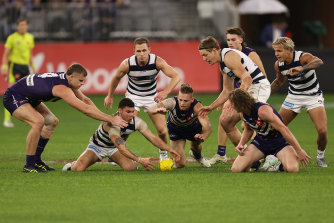 Players fight for the ball at a wet Optus Stadium.Credit:Getty Images

SLIP AND SLIDE
It has been a wet week in the west, and some rain before this match didn’t help. Then it rained again at half-time and in the third and fourth terms. It sent Gryan Miers onto his backside when taking a set shot for goal, one of many players who slipped or looked unsure on their feet.

There’ll be another game on Optus Stadium in nine days when the Eagles take on St Kilda (at least that’s the plan, COVID allowing). Hopefully that’s enough time for the deck to dry up and get a bit of rest.