Perhaps the Cats were due a little luck. After so much preliminary final pain – four losses since 2011 – Geelong are through to another grand final, vanquishing the Brisbane Lions on their home deck by 40 points. And it took a key, and controversial play from Patrick Dangerfield and Gary Ablett to help get them there.

The moment came midway through the third quarter, the ball trapped deep in Geelong’s forward line. Dangerfield had taken possession on the edge of the square but was pinned by an arm. With his free hand, he lobbed the ball up to Ablett, the umpire unsighted, and the little master did the rest.

The Lions got the quick reply to keep them in it, but the Cats steamrolled out of the next clearance, and Ablett was again on the end of it, roosting the ball home on the run from 60 metres. His career will be extended by another week. And Dangerfield, another great, will finally get his own shot at the big dance. 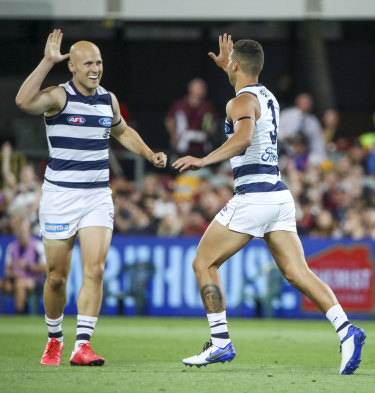 Parochial Brisbane fans can’t blame Dangerfield’s throw. The Cats have the Lions’ number – they smashed them back in round six – and they were too hard, too cool and, above all, more desperate. They just refused to be denied again. The Lions didn’t die wondering, but they weren’t good enough for long enough.

They’d taken a hit before the first bounce with the withdrawal of defender Darcy Gardiner, who injured his knee at training earlier in the week. The versatile Gardiner, one of the competition’s more underrated competitors, was slated to play on Dangerfield when he went forward.

That created headaches for Lions coach Chris Fagan, who spoke pre-match about the need to restrict Geelong’s possession-based game. That meant winning more of the ball in close. If the Lions could hold sway in the midfield, the reasoning went, Dangerfield wouldn’t have the luxury of going forward as often.

By the end of the first quarter, Fagan had a problem. Geelong were dominating, even bullying the Lions at ground level, with clearances at 15 to 4 and scoring shots at seven to two. They’d missed with five of them, but the Cats would win via weight of opportunities if the Lions couldn’t lift around the contest.

Six minutes into the second quarter, alarm bells were ringing around the Gabba. Hawkins, beating Harris Andrews early, took his third mark for his second goal, and Gary Rohan outpointed Brandon Starcevich one-out to kick a ripper. The Cats were out to a 17-point lead and looked set to run away with it.

Now it was do-or-die for the Lions. They got one back quickly, Jarrod Berry tearing through the next two stoppages for Eric Hipwood to keep the home side and crowd involved. Lachie Neale and Mitch Robinson lifted, too, and as the Cats’ entries inside 50 slowed, Andrews got better control of Hawkins.

Late in the quarter, Neale bombed the ball through from 55 metres on the run; at the other end, Sam Menegola had sprayed a shot on the run, with Hawkins gesticulating madly from the top of the goal square. At half-time, the Lions had clawed the clearances back to 17–21 the Cats’ way, the margin to five, and the game was on.

But they couldn’t sustain it, despite the crowd at their backs. Eric Hipwood and Dan McStay both missed crucial set shots for the Lions, while Ablett’s interventions defined the quarter and opened up the match-winning break. The ball spent much of the quarter camped at the Cats’ end, the lead out to three goals.

In the last quarter, Ryan Lester – who’d had the unfortunate task of minding Dangerfield in Gardiner’s absence – won a 50-metre penalty and sprayed the set shot. As the ball ricocheted up the other end, his opponent marked near the boundary line and speared the ball to Zach Tuohy for the sealer.

SIR CLIVE WOODWARD: Wasps in the mood to pull of shock against Exeter