Greater Western Sydney star Toby Greene faces a stint on the sidelines after hurting his hamstring against Gold Coast on Sunday.

The All Australian forward suffered the injury during the first quarter after breaking hard into space. He pulled up short and jogged off the field moments later. 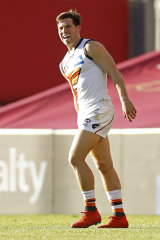 Footage captured Greene yelling "f—— hammy" as he headed towards the race. He was later seen grabbing the back of his right hamstring in the dressing rooms.

Greene is perhaps the most important player in the Giants side and has turned in match-winning performances in the club's two best wins this season.

The Giants have taken an ultra-conservative approach with the star forward this year, having ruled him out for two games off short breaks due to minor injuries.

Though the seriousness of the injury is unknown, he would have to be in some doubt for the Giants' next game against Essendon on Friday night.

Conventionally, a player with an injured hamstring will miss 21 days but the compressed fixture means he could miss more games than usual.