The Giants are demanding a first round pick from Essendon in exchange for Jye Caldwell as their football boss Jason McCartney revealed the club sent Geelong a formal letter on the opening day of the trade period to outline what they saw as fair compensation for Jeremy Cameron.

Caldwell played 11 games in two seasons at the Giants, with nine of those games played in 2020, after being the No.11 pick in the highly rated 2018 national draft but he chose to join Essendon after receiving massive offers from both the Bombers and the Saints to return to Victoria.

The Giants wanted to retain Caldwell and believe he is an even better player after two years of development and has a huge career ahead of him. 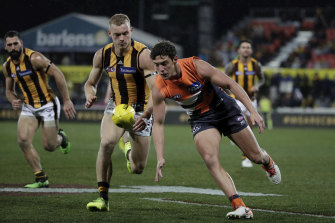 Jye Caldwell, right, in action for the Giants. Credit:Alex Ellinghausen

"We want it to be around the mark of what we paid for in the draft scenario," McCartney told ABC Sport.

"He was a mid-first-round pick and we certainly don't see anything that's changed, and he's actually got better."

"We've invested an enormous amount of time in Jye, and Jye's done really well in conjunction with our medical team.

"He had some injury issues when we brought him in, but we took that on board and he's on top of all that.

Essendon's initial offer for Caldwell was not acceptable to the Giants, however they could threaten to walk Caldwell through the pre-season draft if a deal was not struck, as Caldwell is uncontracted, although all parties would prefer to avoid that option.

Meanwhile, the Giants revealed they have informed Geelong they are interested in picks and players as the Cats look to develop a deal to satisfy Greater Western Sydney in return for Cameron.

Sources said the Giants have their eye on Brandan Parfitt, however the Cats are adamant they want to retain the recently re-signed 22-year-old, who played out the grand final with a broken thumb. Parfitt has shown no desire to leave Geelong.

"There are some players of interest but there are also some nice picks there so we will work through that," McCartney said.

McCartney told the ABC they had been in contact with Cameron to let him know they were matching Geelong's offer and that having him return to the club remained an option as far as the club was concerned.

"We would absolutely love Jeremy Cameron to be continuing at the Giants," McCartney said.

The Giants signed former Docker Jesse Hogan on a one-year deal on Wednesday and are looking to trade in Melbourne ruckman Braydon Preuss. They are also having to negotiate the departure of Jackson Hately to Adelaide.