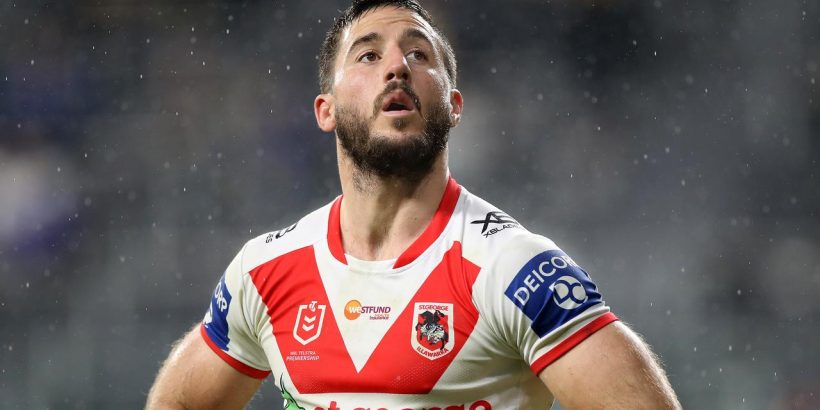 Injured Dragons captain Ben Hunt believes the NRL is responsible for a growing injury toll in the league having “gone too far” in trying to speed play up.

Hunt played 71 minutes against the Sea Eagles on a broken leg and is now facing four to six weeks on the sidelines.

Speaking to Nine News, he said he believes his injury is just one of many caused by rule changes implemented by the NRL for the 2021 season.

“I personally think the NRL has gone too far trying to speed the game up too much and that’s what’s creating a lot of misfortune in the game at the moment,” he said.

“That’s my point of it. Being out there, it’s ridiculously fast at the moment. It’s non-stop and I think that’s why there’s more injuries creeping into the game.

NRL: The NRL 360 panel discuss the severely souring relationship between the South Sydney Rabbitohs and playmaker Adam Reynolds who has been offered a one-year extension….

NRL: The NRL 360 panel discuss the severely souring relationship between the South Sydney Rabbitohs and playmaker Adam Reynolds who has been offered a one-year extension.

“They stop the clock all the time so there’s more actual game time. Everything’s faster and I think that’s what’s contributing (to the injuries).”

Hunt added that he doesn’t believe he is the only one who feels as if the NRL has pushed the envelope too far.

“Anyone you talk to, if they’re going to be honest with you, I think would say the same,” he said.

“The game has just got to a pace now where it’s pretty hard to keep up all the time.”

Several teams are dealing with injury crises after just four rounds this season, which has seen a ‘six again’ rule implemented for 10-metre infringements, and scrums ditched for play-the-balls when the ball or a player goes over the sideline.