New Wests Tigers recruit Ken Maumalo had no idea the tears were about to start overflowing approaching full-time in the middle of Central Coast Stadium last Sunday.

“I guess that happens when you’ve been at a club more than 10 years and you’re about to leave,” Maumalo told the Herald, before joining his Tigers teammates for the flight to the Sunshine Coast on Thursday evening. 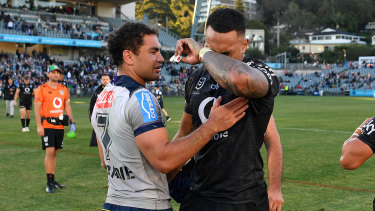 Ken Maumalo sheds a tear after his last match in a Warriors jersey.Credit:NRL Photos

A tall, powerhouse winger, Maumalo is averaging nearly 20 runs a game for 165 metres this season. Maguire said he admires good talent but said he had an even greater appreciation for “good humans”.

“I know how much teammates mean to Kenny, which is why you saw those tears the other day,” Maguire said. “He’s a good player but a better human.”

Maumalo signed a deal until the end of 2023 with his partner Lereno and two-year-old son, Leighken, in the middle of making the permanent move to Sydney. The pair were the reason Maumalo was one of four Warriors players to fly home because of homesickness in the middle of last season, where the New Zelaand club spent the entire year in Australia.

Maumalo said that decision never impacted on his ability to negotiate a longer-term deal at the Warriors. He loved the fact he played with Roger Tuivasa-Sheck as well as future star Reece Walsh.

The New Zealand club signed Canterbury’s Dallin Watene-Zelezniak on Thursday as a replacement.

Maumalo was already aware that the Tigers are scheduled to host the Warriors in round 20 at Bankwest Stadium.

Linking with Maguire and a Tigers club in the middle of a reboot was just as pleasing.

“I know there’s so much potential here and the Tigers are a club going places,” Maumalo said. “The Tigers contacted my manager when I wasn’t playing regular footy, and things went from there.

“There were a few clubs interested, but the potential at this club, along with my close relationship with ‘Madge’ [Maguire], it was an easy decision in the end.”

Maumalo scored a hat-trick against the Storm, just as he did against the Melbourne club on Anzac Day. Tigers fans would be happy with just the one try on Saturday night on the Sunshine Coast when Maumalo starts on the left wing against the Storm with fan favourite David Nofoaluma to revert to the right side where he has scored plenty of tries.

The Tigers still have one spot to fill on their roster before August and one of the few clubs with enough funds to make a move on a decent player.