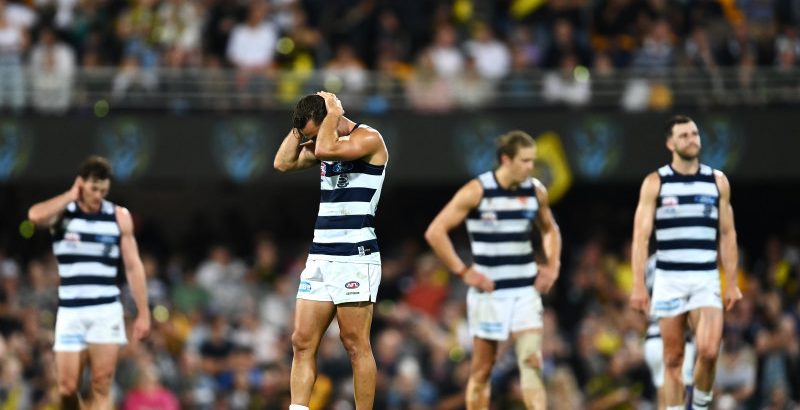 There’s one game more than any other that sticks in a footballer’s memory. More than any premiership, it’s thoughts of a losing grand final you can never really shake.

I know the feeling well. 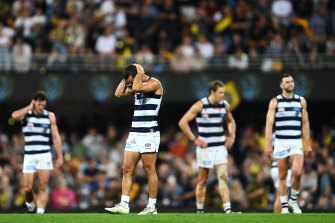 Dejected Cats stand on the Gabba after the final siren of the 2020 grand final.Credit:Getty Images

Our loss to Adelaide in the 1998 decider still haunts me to this day.

In many respects, there are similarities between that North Melbourne defeat and what Geelong endured against Richmond last year.

At half-time against the Crows, we had a lead of 24 points despite booting 6.15.

The Cats were up by a similar margin nearing the main break, before Dustin Martin kicked the first of four brilliant goals that won him the Norm Smith Medal.

The Cats didn’t capitalise on their dominance, just as we hadn’t in ’98. I was one of the culprits that day, finishing with 1.4. 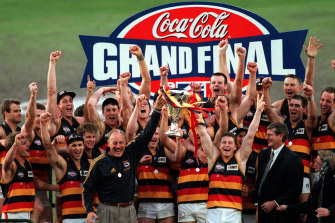 While we didn’t play the Crows again until round 22 the following year, we got a little pride back, winning by 76 points before going on to win the flag. That certainly wiped away some of the pain.

The Cats can begin their own journey towards redemption on Friday night, in a contest that could have huge top-four ramifications.

Both teams have four wins from the opening seven rounds and can’t afford too many more slip-ups given they still have a number of tough fixtures to come.

There should be a few Cats, in particular, itching to right the wrongs of last year.

One of them, Patrick Dangerfield, unfortunately won’t be there and the game on Friday night will be poorer for it. Like me, he had an average grand final and sitting in the stands will hurt him.

For Danger, the demons of that one day in October will linger for even longer.

After just five disposals and failing to hit the scoreboard, Gary Rohan owes himself a big game. His baseline needs to be pressure. Tackle, tackle, tackle. Any goals from there are a bonus.

He should get a bit more freedom, given the Tigers defenders will have their hands full with Jeremy Cameron’s inclusion alongside Tom Hawkins – especially now Dylan Grimes is out due to concussion.

Even Tom Hawkins, after a Coleman Medal year – and already a premiership hero – would have a point to prove after failing to nail a few shots for goal. He booted 1.2 from only three kicks for the entire game.

If your opportunities are that limited, you simply have to kick them.

His new partner in crime, Cameron, also knows the feeling of being beaten by Richmond on footy’s biggest stage after being smashed in the 2019 grand final.

He wouldn’t have played too many Friday night games in his career, and if his Cats debut down at Kardinia Park gave him “chills”, then imagine how quickly the hairs on the back of his neck will stand up when the Tiger army is in full voice at the MCG.

But back on those who played in the decider last year, Mark Blicavs is another Cat who’ll be keen to show his true colours.

So versatile, and normally so dependable, he was an example of a team that felt the Tigers’ second-half pressure and became panicky. It’s easier said than done, but cool heads will be important.

Then there’s the skipper. Like Hawkins, Joel Selwood already has premierships to his name and even under duress was one of the Cats’ best.

He had 21 disposals and five tackles, which, from a Geelong perspective, was only bettered by Mitch Duncan’s 25 touches and a goal.

In that finals series he underwent finger surgery, which probably held him back a crucial 1 or 2 per cent. This time, he’s fit and firing.

But more than that, being the captain of a losing grand final team adds an extra layer of torment. Come the first bounce on Friday night, I doubt there’ll be anyone hungrier than Selwood, who has already shown this year he’s got plenty left to give.

Just who gets Martin will be intriguing.

As Cats coach Chris Scott said during the week, you can beat him eight out of 10 times, but he can still slaughter you.

The absence of Jake Kolodjashnij, along with Mark O’Connor who’s done some important jobs this year, means the Cats may have to look left field for Dusty’s opponent this time around.

Melbourne’s Michael Hibberd showed it is possible to quell his influence.

For Dusty, I’m looking at either Zach Tuohy or Tom Stewart. Tuohy is quick, powerful and has a bit of mongrel, but maybe not the tank to follow Martin all game.

Scott may not want to sacrifice Stewart’s intercept marking ability, but he can match Martin aerially.

While Richmond proved last week they can win without Dusty, I suspect the loss of Trent Cotchin will ramp up their reliance on him.

Still, that’s just one part of the game the Cats need to get right. For Geelong, any revenge will only come with all 22 players buying in.