Incoming St George Illawarra coach Anthony Griffin expects to have autonomy over the selection of his side and believes he can get the best out of maligned playmakers Corey Norman and Ben Hunt, even if he's not sure how they fit into it yet.

The Dragons have announced Griffin as Paul McGregor's replacement on a two-year deal, which could be extended to a third season if the club is satisfied with his performance. One of the first issues Griffin will need to address is the composition of his spine. 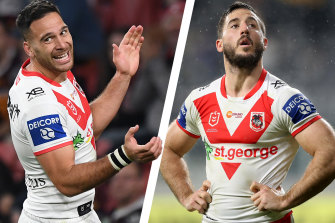 Corey Norman and Ben Hunt have struggled for consistency during their time at the Dragons.Credit:Getty

"I wouldn't say right now where he is going to play, but he could can play in both spots."

Asked about the enigmatic Norman, the former Penrith coach said: "I'm looking forward to working with him. I'm not sure what's happened, I haven't been in there, but Corey is a really classy player.

"He's got a great kicking game and is coming into a real sweet spot in terms of experience, he's 29 years old. He's got a good few years in front of him. Most playmakers at that stage of their career get towards their best. We'll see what happens."

McGregor parted company with the club with more than a year remaining on his contract, frustrated that he no longer had sole discretion in selecting the best 17 players. Griffin, however, expects to have final say.

"I'd imagine it's a totally different feel to Brisbane," Griffin said. "Brisbane is a one-team town, they built on enormous success on the back of that era in the '90s. There's a whole different expectation and environment at St George Illawarra to what there is at Brisbane.

"Wayne's aura in Brisbane is something ingrained in the place, he was at the Dragons only for a couple of years and was very successful. It's probably a bit different."

The man dubbed "Hook" is open to the prospect of working with current assistants Shane Flanagan and Dean Young, the latter an unsuccessful candidate for the top job.

"I just want to get in there and get their thoughts on what they want to do," he said.

"I haven't got any immediate plans to make changes."

Griffin will coach against the Panthers next year for the first time since his sacking and falling out with Phil Gould.

"I enjoyed my time at Penrith until the last little bit," he said. "They're a great club, there are some great people there, a great fan base and I'm happy to see the success they are having at the moment. By the time I coach a St George Illawarra Dragons team against Penrith, it will be three years and 80 games since it happened. It won't be a big one for me."