Hawthorn coach Sam Mitchell says James Sicily is the obvious choice to be the Hawks’ new captain, as he declared there is “no speed limit” on the progress his rebuilding team can make this season.

The Hawks are one of several clubs discussing who their new skipper will be, for veteran premiership ruckman Ben McEvoy retired last year.

Vice-captains Sicily and Jaeger O’Meara split time in the top role last year when McEvoy was seriously injured, but O’Meara is now with Fremantle, while fellow senior players Jack Gunston and Tom Mitchell have also joined other clubs. 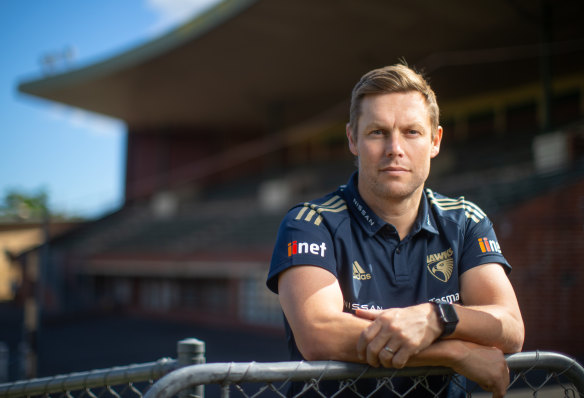 Coach Sam Mitchell says the Hawks have much to look forward to this season.Credit:Simon Schluter

On a day when the Hawks’ staff and their children joined players in training at Monash University, in what the club said was a relationship-building exercise after years of fragmentation because of the pandemic, Mitchell said the Hawks would seek to fine-tune their leadership group at next week’s four-day camp in Gippsland.

“We go to camp next week where we’ll start to knuckle down and see what the process and structure of our leadership program looks like for the year. But, certainly, I am pleased with the growth in that area over the last month or two since we’ve come back,” Mitchell said.

The four-time premiership player said the Hawks will discuss “what we stand for, what we want to achieve”. The playing list remains in a deep rebuild, which could mean a return to the finals are several years away.

The Hawks know patience is required, having finished 13th with eight wins last season, but this will give a new captain time to grow into the role.

“You don’t need to be a master of everything to be a captain of a footy club. You need to be strong in a couple of areas and know how to get other people to help you in others,” Mitchell, the 2008 premiership skipper, said.

“And, so long as our players have a great understanding of the things that we need as a football club to go where we plan to, then I think collectively we will make some decisions after that camp, I would imagine.”

Sicily, 28, is in the sweet spot to claim the top role. The key defender is well liked internally and is one of the team’s best players. He claimed his maiden Peter Crimmins Medal last year. 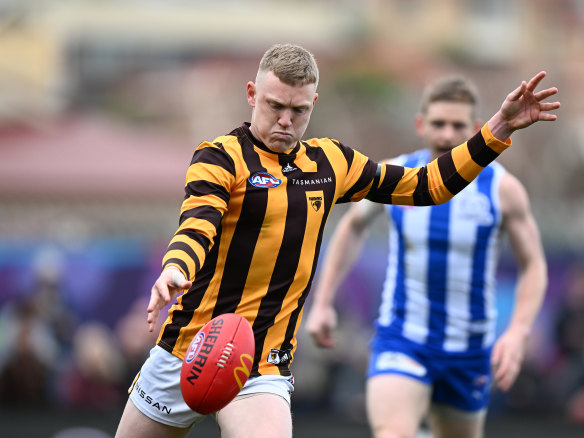 “I mean, it’s obvious externally, but James Sicily is the big, obvious one,” Mitchell said.

“But, certainly, there’s a lot of players who I wouldn’t underestimate their influence on our group.”

Midfielder James Worpel, who turned 24 on Tuesday, has been in excellent touch this pre-season, and is keen to rebound after a disappointing 2022 when he was banished to Box Hill early in the campaign and required a shoulder reconstruction in July.

Mitchell said impressive draftees Josh Weddle and Cameron Mackenzie hadn’t looked “out of place in match play”, but emerging gun Josh Ward has a hip flexor issue and is on a restricted program. However, he is expected to rejoin full training soon. Conor Nash has a “grumbling” knee and is also restricted.

Mitchell said the competition to be the frontline ruck was strong, as he sought a balance between talls who can dominate hitouts but also provide forward craft. Ned Reeves, who averaged 27 hitouts per game last year, former Docker Lloyd Meek and Max Lynch are the chief contenders, but Mitchell said youngster Max Ramsden, taken in last year’s mid-season draft, had impressed.

Mitchell said the Hawks were keen to develop as quickly as possible.

“There’s no speed limit on where we’re going,” he said.

“We’re a young group, young coaching group, young playing group, but that doesn’t put any sort of speed limit on where we want to go. I think our playing group are really clear on the direction and the desire that we have to go to, to get to the top and to stay there. There’s not a quick, easy fix to get there.”