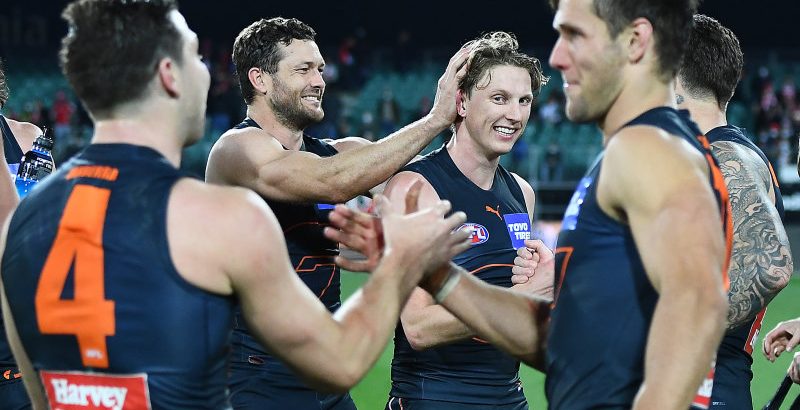 They came to see Lance Franklin create history, iced with a Swans win. Instead, they saw Sydney’s two displaced clubs deliver an epic elimination final in which the Giants prevailed in arguably the best match in the two clubs’ short history.

In one of the best finals in recent years, the Giants fell over the line by one point – 11.8 (74) to 10.13 (73) – at Launceston, but the thrilling victory was marred by another controversial incident involving Toby Greene for making contact with an umpire.

Franklin finished the match misty-eyed, perhaps ruing his chance to pinch the game with a long-range shot at goal in the dying minutes.

The finest forward of his generation, Franklin finished with three goals, leaving him stranded on 995 goals. If there is a silver lining for the Swans, their fans can look forward to Franklin reaching the magical 1000-goal milestone live in the flesh next season at the SCG.

Trailing by 29 points early in the third quarter, the Swans stormed home but ran out of time against a Giants side that had stopped to a walk.

They had multiple chances to win but Franklin, Tom Hickey, Sam Wicks and James Bell all missed getable shots at goal to put their side in the lead. 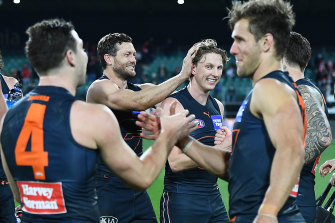 GWS celebrate their nailbiting win against the Swans in Launceston on Saturday.Credit:Getty

Harry Perryman was the saviour for the Giants, his desperate lunge on the line denying Justin McInerney what could have been the winner.

Greene finished with the ball in his hands but, in a finals deja vu, faces a nervous wait to see if he will be sanctioned after making contact with umpire Matt Stevic moments after the three-quarter time siren.

The incident came after Greene had faded out of the match, having been one of the best players on the field in the first half.

“He shouldn’t have been doing it, that will definitely be looked at, he just shouldn’t do it,” former Geelong great Cameron Ling said on Channel Seven.

After an engrossing opening in which Franklin and Greene had key interventions, the Giants flexed their muscle in the second term at the contest against a Swans midfield feeling the absence of Josh Kennedy and Callum Mills.

Though the territory battle was being won by Sydney, the Giants’ forays forward were more incisive, slamming five goals on the bounce plus another after the half-time siren.

Using guile more than power, Greene was a handful at ground level, losing his man in traffic for each of his three goals in the first half. Dane Rampe was his nominal opponent though was at fault only once.

Needing a lift around the ball, the Swans found it in the third term through Luke Parker and George Hewett, the latter nullifying the influence of Tim Taranto, who had been important in the clinches.

The move of Franklin higher up the ground dulled his impact but made the Swans less predictable entering their forward 50. Playing as the deep forward, Isaac Heeney was the beneficiary, kicking two vital goals to keep his team in the hunt.

At the other end, Jesse Hogan was a colossus with his vice-like hands, hauling in six contested grabs, and though he drained a pressure kick after the siren his two posters left the door ajar for the Swans.