Luke Keary may have been sidelined for the past four months with an ACL injury, but the champion half’s influence continues to be felt on the Roosters.

Rookie Sam Walker was handed the playmaking responsibilities in Keary’s absence, and the teenage No.7 attributed his success this year to the guidance of Keary, who he says continues to call coach Trent Robinson with pointers while the team is based in Queensland.

The Tricolours have been cursed with injuries this season, beginning with a season-ending ACL to Keary in March. But Walker’s progress has been the silver lining.

The 19-year-old continues to exceed expectations each week, despite being a regular target for opposition sides given his small stature, and has helped the Roosters to fourth spot with three rounds remaining – an extraordinary achievement given their bulging casualty ward.

“He’s been enormous,” Walker said of Keary. “There’s no better person to talk to. He’s always helping me. He’s always around and even gives Robbo a call just to push me in a certain direction.”

Walker has become a firm favourite at the Roosters and said his father and uncles had played a major part in helping him deal with sudden spotlight. 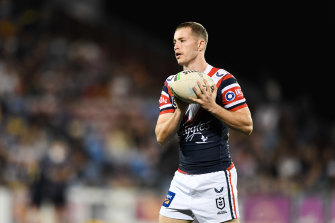 Sam Walker continues to exceed expectations each week, despite being a regular target for opposition sides given his small stature.Credit:NRL Photos

His father, Ben Walker, was a former Bronco, while his uncle Chris played State of Origin for Queensland. His other uncle, Shane, played 149 NRL games for the Rabbitohs and Broncos.

“My old man and uncles also went through it when they were coming through. They’re always been there to tell me how to handle it,” he said.

“That’s made it a lot easier for me. It’s tougher for players who haven’t had the same upbringing but for me, it’s been a really easy transition.”

Walker may have some of his toughest weeks ahead with Victor Radley now out until finals.

Radley will sit out for three games after entering an early guilty plea for diving into the legs of Broncos half Albert Kelly, who was attempting a field goal.

Earlier in the year, Radley was rubbed out of the game for five weeks due to a high shot. Walker said the team is rallying around Radley, with the entire side of the strong belief he should not change his style of play.

“He’s an amazing player and also a great person off the field as well,” he said. “For us as a team it’s obviously disappointing to lose him, but we never want him to change the way he plays.

“The impact he’s had on my career already is enormous. Not just hits and stuff, but the way ballplayers as well makes a halfbacks job really easy out there.”