It came as a bit of a surprise to see the tears flow for my old mate John Longmire after Sydney’s win over GWS last week.

The only other time I’ve seen him cry was when he missed our 1996 premiership at North Melbourne due to a knee injury.

While that would have come with immense personal disappointment, like on the weekend, it shows the deep connection he forges with those around him. 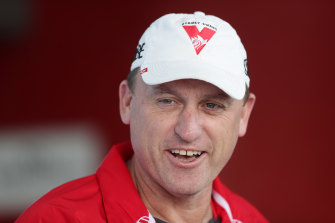 ‘Horse’ is often known for his hard-nosed demeanour, and he certainly carries a level of fear factor, but I’ve got no doubt the reason he’s been such a great coach is because he’s still approachable.

As a player, his country upbringing allowed him to get along with just about anyone; the ‘lads’, the footy-heads and lawyer/accountant types.

In any situation he could adapt.

He was never an ‘overtalker’, but with his booming voice, when he did speak, you listened, and in Sydney, right now, his message is getting through loud and clear.

When you think of the best Swans’ teams in recent years, under Paul Roos and then John, they were generally renowned for their defensive intensity and ability to counterpunch.

But this team is very different.

They are dynamic in transition and there is a level of enthusiasm and momentum they could ride deep into September, much like the ‘Dogs of 2016’.

Again, Longmire has been able to adapt, transforming this team into a genuine finals ‘x-factor’ – ahead of time, too.

Even a month ago, I thought a respectable finals appearance might be the ceiling for Sydney this year, with the Swans more likely to need another year of building to contend next year.

But as it stands, there a few teams you’d rather face less.

Geelong, Melbourne and the Western Bulldogs remain a level above the likes of Brisbane, Port Adelaide and West Coast who have all shown to have a few frailties.

For me, the Swans sit somewhere between those two rungs.

Outside of GWS, no club has done it tougher this year given how long they’ve been on the road due to Sydney’s lockdown.

Even last week, the Swans lost Callum Mills and Harry Cunningham at the last minute after they were forced to isolate.

But they’ve been able to overcome all of those difficulties and find a camaraderie that is proving to be something special.

There’s still a level of familiarity with those Swans teams of the past given Josh Kennedy, Luke Parker and Dane Rampe are still performing so consistently.

Kennedy might not be at his absolute peak, but his leadership and grunt around the contest is still so important.

But what’s allowed a player like Kennedy to have the longevity he has is the growth underneath.

He and Parker aren’t being asked to carry this team and that is testament to the incredible development program at this club. Some people will point to the Swans’ academy concessions, but it’s much more than that. 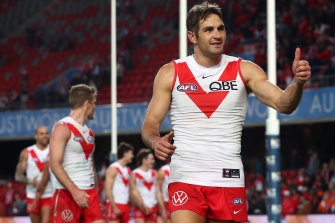 Other clubs have academies without having the same level of production. And let’s face it, not every senior player is an academy product, anyway.

The Swans have a young core led by guys like Isaac Heeney, Callum Mills (both from the academy) and Tom Papley and Jordan Dawson (who aren’t).

There’s Ollie Florent and Will Hayward who continue to elevate their game, and then first-year players Chad Warner and Errol Gulden.

Tom McCartin already looks like a veteran in defence and Tom Hickey is doing what no one else has managed at his fourth club, by playing career-best footy.

While he’ll never be at the level of a Dean Cox-type ruckman, it’s easy to see the influence of his assistant coach on Hickey’s game.

The decision to move Nick Blakey to half-back has also been a masterstroke, given his obvious talent.

When you have players of that ability you have to find a way to develop them at senior level – often through difficult times – and Longmire has managed that.

It’s not often you get so deep into analysis of the Swans without mentioning a certain bloke named Buddy.

The fact this team has been able to take so many strides without him due to injury means his presence is now almost a bonus.

He’s the cream on the cake and you can see him growing with confidence in his body every week. What a story it would be if he could grab that elusive flag in the harbour city.

It wasn’t all that long ago that was a pipe dream, but now it would be no surprise to see Franklin strutting his stuff on footy’s biggest stage again under the coaching of Longmire.

‘Horse’ has one premiership from three grand final appearances and has only missed the finals twice in his 10 years as coach.

He mightn’t have the flags of Damien Hardwick or Alastair Clarkson – yet – but there’s still an argument he’s every bit their equal. 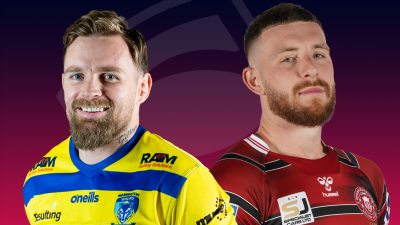