Sea Eagles winger Jason Saab admits that tough conversations with his father and Manly coach Des Hasler have turned around his season.

The Manly winger, who sought a release from the Dragons to join the club at the end of 2020, scored a hat-trick in his 16th NRL game on Sunday as Tom Trbojevic produced a masterclass for the Sea Eagles.

With Manly leading 38-32, Saab also managed to tackle Ken Maumalo over the sideline in the final minute to snuff out the Warriors’ last chance of levelling the scores. 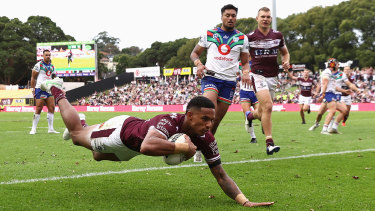 Jason Saab scores one of his three tries against the Warriors on Sunday.Credit:Getty

In another difficult conversation, his dad sat him down after the round four 46-6 thrashing at the hands of the Panthers. Saab said he knew it was going to be serious when his father asked: “Son, can I talk to you without you getting annoyed?”

“He told me that it looked like I wasn’t putting my body on the line,” Saab said. “It’s weird because when it comes from dad I get a bit hurt. I know I’m not letting my family down, but I want to make them proud, so I carried that chat with me.

“It’s hard because it’s like a snowball effect. You take a loss and another loss and you think, ‘Am I good [enough]?’ I’m the worst when it comes to head noise, ask anyone. I overthink and let it loop in my head all the time, but that’s something I’ve done since I was a kid.”

Whether it was the chat with his father or Hasler, something clicked.

Saab also originally came to Manly to play beside best mate Keith Titmuss, who he says was like a brother to him. Titmuss died at a training session on the same day Saab reached out to him to tell him he was joining the club.

He has now vowed to make every game a tribute to him.

“Playing back at school was the best footy you could play because you just play with your mates,” Saab said. “That’s what I wanted to do by coming here.

“At the start of the year it was obviously shaky and it was hard to see, but I can probably look a bit further into the future and realise what a good thing I have going here.”