North Melbourne coach David Noble is keen for the Kangaroos to seek a priority pick from the AFL if the winless club continues to struggle for victories for the rest of the season.

Sitting at the bottom of the ladder with a percentage of 52.7, North Melbourne have only won one match in their past 23 games, although their performance in recent weeks has picked up with the Kangaroos in the contest against both Collingwood and Melbourne. 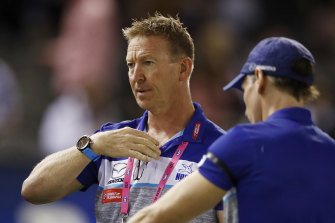 His declaration will spark discussion after the Kangaroos took a deliberate approach to rebuild their list through the draft at the end of last season, trading out Ben Brown and Shaun Higgins and delisting a bunch of experienced players who had been struggling to perform consistently.

They have been hard hit by injury to their experienced players such as last year’s best-and-fairest winner Luke McDonald and solid defender Robbie Tarrant, while free agency recruit Aidan Corr has been injured.

The Roos used pick three at last year’s draft on Will Phillips who has been slow to get going after missing football last season due to COVID-19, and pick 13 on Tom Powell who has been outstanding.

Gold Coast are the most recent club to have received special assistance from the AFL, gaining a priority pick which allowed them to select Matt Rowell and Noah Anderson with picks one and two in the 2019 national draft.

The Suns were also given concessions to enable them to recruit more rookies and their academy was expanded with access to those players improved.

The Brisbane Lions received a priority pick at the end of the first round in 2016 when Noble was the club’s football manager after finishing in the bottom four in the previous three seasons. The Lions have finished the home-and-away season in the top four in the past two years, making last year’s preliminary final.

To receive a priority pick clubs need to make an application to the AFL Commission with the previous rule being solely dependent on the number of games won in the previous two seasons, a rule which led to allegations of tanking levelled against teams.