South Sydney football boss Shane Richardson has sensationally resigned to lessen the financial burden on the club in the wake of the COVID-19 crisis.

Richardson informed coach Wayne Bennett and the rest of the football department on Thursday morning, having spoken to co-owner Russell Crowe earlier in the week. 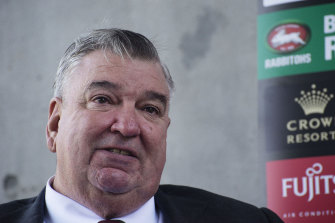 He will continue as an consultant but the move effectively ends his 17-year association with the Rabbitohs after coming to an agreement with chief executive Blake Solly earlier this week — just days after the NRL season was indefinitely suspended.

"The reality is, over the next 18 months, we have to run a really tight ship in Club Land," Richardson told the Herald. "In business, you don't start at the bottom, you start at the top, so I took a close look at what I'm doing. I said to Blake that it will help make a difference if I go.

“We’ve already made the hard decisions standing people down. Blake and I have worked out what we will look like when we start playing again. If you take me off the top, it will leave a lot more money for the people down below.”

Richardson had intended to leave Souths at the end of next year, when his contract ran out, but he has expedited his departure after standing down most of the football club staff because of the indefinite suspension of the season.

He joined the club from Penrith in late 2003, nursed it through troubled times before Crowe and Peter Holmes a Court bought the club in 2006, and then guided the Rabbitohs to an emotional premiership in 2014, their first in 43 years.

He then shocked everyone at Redfern when he joined the NRL as the head of game development before returning to the club as general manager of football just a year later.

In recent months, Richardson has butted heads with chairman Nick Pappas, who admitted in an interview with the Herald last month he had offered Richardson an early termination of his contract.

Asked what role the fallout with Pappas played in his sudden departure, Richardson said: "Nothing. Honestly. I went to them this time. The last time was completely different and it should have been handled differently. I never lost respect for Nick and I told him that. But this is my decision. People will say this and that. But it's the truth." 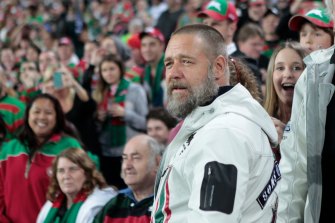 Crowe paid tribute to Richardson, saying the 2014 premiership would not have happened without him.

"Quite simply, without Shane’s focus and input during the decade leading up to the 2014 premiership win, that victory would not have happened," Crowe said. "Such is his vital contribution.

"Shane has made an incredibly selfless gesture on behalf of South Sydney. It’s something I’ve come to expect from him, he always puts the needs of the club first in everything he does.

"We’ve always worked well together, even if we weren’t in agreement, and that really has been the key to our relationship. Momentum. Moving towards goals. Not allowing the smaller stuff to get in the way of the larger prize.

"We’ve had a great system whereby whenever either of us have felt we need clarification, we sit, usually over a beer, and we talk for however many minutes or hours it takes to get a consensus. There’s probably no one in the game I have a higher respect for.

"We’ve known each other a long time now and started the battle to lift the fortunes of the club together in 2006. We came up with the simple business plan based on the clubs past history and players and pushed everything towards its two principles."

Yours for $4 million: Mariners could be relocated as owner puts club up for sale