West Coast have received a boost ahead of their finals campaign with good news for injured star defender Jeremy McGovern, who has avoided hamstring surgery.

McGovern will likely be back for week two of the finals, should the club make it that far , according to Eagles footy boss Craig Vozzo.

Meanwhile, Richmond are waiting on scans to confirm a suspected ruptured ACL for Ivan Soldo and for Tom Lynch's hamstring injury. The Tigers are optimistic Lynch's lay-off will only be a couple of weeks. 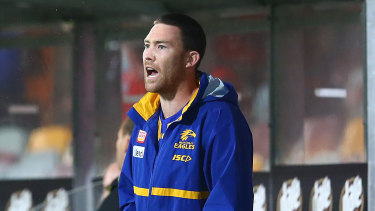 Jeremy McGovern should be back for finals week two. Credit:Getty Images

For West Coast, there were fears the hamstring injury would end McGovern's season.

"We had some good news," Vozzo told the ABC on Saturday.

"We are waiting on a final review but it looks like we have avoided surgery. At this stage it is looking like a three to four week injury.

"It was good news overall because we were bracing for the worst.

"I have no doubt with Jeremy he will be pushing for as earlier as possible. We are hoping it will be earlier than that [finals week two] but that is [probably] more realistic."

There had been fears Redden would be out for longer but surgeons were able to insert a plate into his hand when he went under the knife, improving his chances of playing.