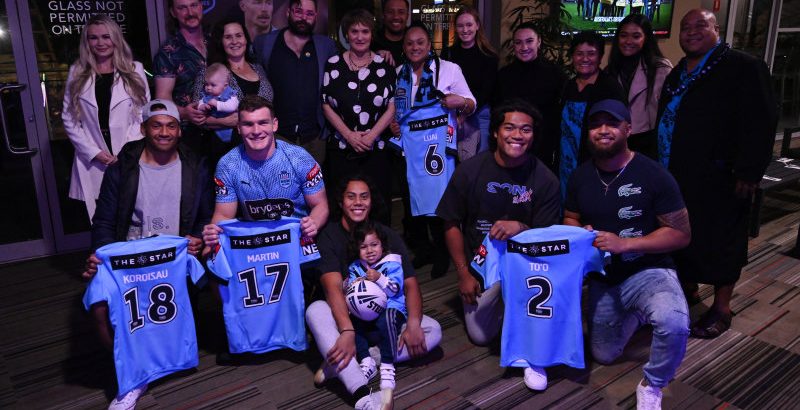 There wasn’t a dry eye in the house at the NSW team’s jersey presentation on Sunday night — except for Liam Martin’s mother, Maxine.

“I was wearing make-up for the first time ever, so Liam knew it must have been a special occasion,” the West Wyalong high school teacher laughed. “There’s no reason to cry — I’m on such a high.” 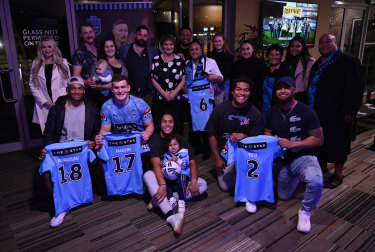 Behind all the white noise that often engulfs Origin, it’s easy to forget the hard roads many players travel down to reach the biggest stage.

Martin, 24, is one of three Penrith players making their debuts in Wednesday night’s series opener against Queensland in Townsville.

Like Martin, it’s unlikely Jarome Luai, 24, and Brian To’o, 22, would be here if not for the love and support of their families.

The To’o clan arrived late to Sunday’s function and were called up just as they arrived. The honour of handing over the sky blue jumper was left to Brian’s older brother, Eddie, who is eight years his senior. 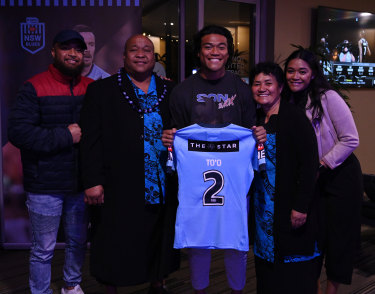 Brian To’o with his family after receiving his NSW jersey from brother Eddie.Credit:NRL Photos

“It was emotional, eh?” Eddie recalled. “We always knew that he would do something in the sporting arena. He’s always been that funny kid off the field — but on it he’s always been a beast.”

The To’o family was left devastated in 2008 when Brian’s eight-year-old sister, Danielle, passed away following a short battle with cancer the day before his 10th birthday.

It puts a game of football into context. It also means she is often in his thoughts whenever he plays, regardless of the jersey he’s wearing.

“There’s a little quote he always uses in the group chat between us brothers,” Eddie said. “Carry and fly. He’s always saying, ‘I’m going out to carry my family and friends on my shoulders, and fly with my little sister above me’. 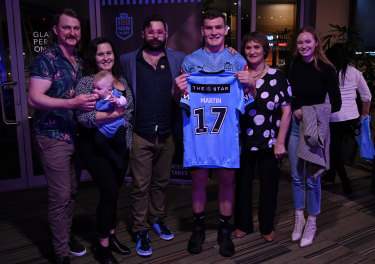 The Luai family’s story has been told many times; about how his father, Martin, missed his son’s debut for the Panthers because he was serving a two-year jail sentence.

When it came to speaking on Sunday night, holding the prized No.6 jumper his son will wear in coming days, he choked back tears before uttering a word.

“We’ve been through a lot as a family” Martin said. “I know this jersey means a lot to NSW fans. I know it’s been passed down from past players as well. And I know it’s something that Jarome will have so much respect for. I’ve seen him grow up into the young man he is today. It’s just been a pleasure … I’m lost for words, eh?” 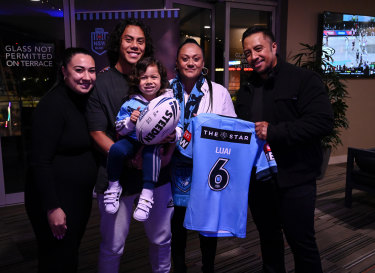 Jarome Luai with his family after receiving his NSW jumper. Credit:NRL Photos

Then it was Jarome’s turn to address his new Blues teammates.

“Like my old man said, I’m going to give you everything I’ve got,” he said. “We’re not losing to these guys.”

Which brings us back to Liam and Maxine Martin. In his early years, when he first started playing junior reps for Penrith, they’d jump in the car and head north.

During the five-hour drive, Liam would study, teaching the history teacher alongside him all about the wonders of biology and chemistry.

“She was my rock growing up,” Liam told his teammates, tears in his eyes, before dropping a few expletives while caught up in the emotion of the moment.

“Don’t worry,” Maxine said sternly on Monday, “I’ll be having a word to him about his language.”