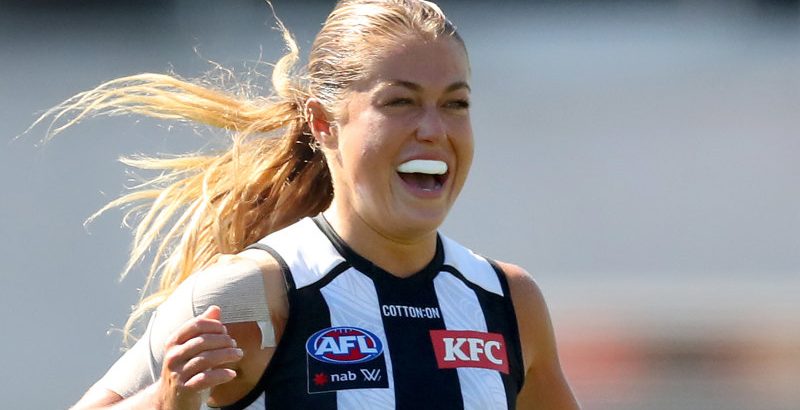 The 26-year-old lives six months a year in two worlds so vastly different they barely intersect. 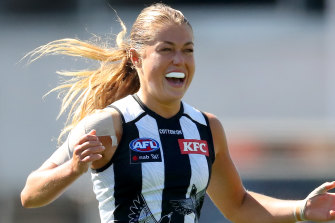 During Ireland’s summer, she’s a star forward for Mayo in the Ladies Gaelic Football Association, driving three hours to training before returning to Dublin three times a week.

In Australia’s summer, she wears No.7 for Collingwood’s AFLW side and is one of the best runners in the competition.

Most years that keeps her busy, but this time she decided to throw in some training for the Irish soccer team between seasons, just for good measure.

“You don’t want to get caught being the jack of all trades but the master of none,” Rowe said.

It would be easy for Rowe to get carried away with her multiple sporting accolades, but she’s as down to earth as they come.

“I need to focus on where I am and what I’m doing at the time, so as soon as I land in Australia it’s like, ‘Right, how can we be better and what do we need to do’,” she said.

Rowe made the move to Melbourne in 2019, making her debut in Round 1 and was awarded the Magpies’ best first-year player.

She’s been splitting her year between hemispheres since, admitting that when first approached to try AFL, she thought the email was spam.

“I’d just played in the all-Ireland finals and got an email from someone over here and he said, ‘I think you’d be really suited to Aussie Rules, would you come to Australia to meet with the teams?’” Rowe said.

Explaining that her philosophy in life is to take a risk and seize opportunities, she agreed to fly to a country she’d never been to, to meet with professional clubs from a sport she’d never played.

“I didn’t really know what I was coming over for, I’d never been to Australia before, I genuinely hadn’t a clue what to expect, I’d never kicked a ball … I was like sign me all you want but I don’t know how good I’m going to be,” Rowe said.

“To come in and not be good at a sport was difficult because you’re used to being good at the sport you’ve grown up playing, so that in itself was character-building.”

‘To come in and not be good at a sport was difficult because you’re used to being good at the sport you’ve grown up playing, so that in itself was character-building.’

Her energy is infectious, and with the quintessential charismatic Irish humour, she admits she’s the joker of the team.

This is evident as she discusses her avid interest in the human brain and her ensuing studies in neurolinguistics and hypnotherapy. 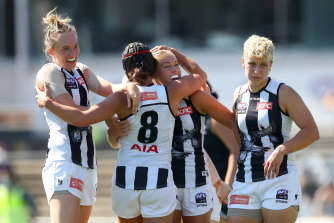 “For me, psychology has always been a huge part of Sport, it’s all about the subconscious mind and the voices in our head,” she said.

“I’ve always wanted to have a way to rationalise my thoughts and feelings and then deal with them and move past them. There’s so many highs and lows in sport and you need to try and keep yourself as steady as possible.”

Rowe reflected positively on the past two years shrouded by the Covid-19 pandemic.

“COVID has actually been good for some athletes because it’s had to challenge our inflexibility,” she said.

“We’re so caught up in our routine and the way things have to go exactly as planned in order for us to perform, but we have had to adapt to so much change and it’s unsettling for sportspeople because we are perfectionists at times.”

Admitting that her interest in hypnotherapy began with trying to help her Mum Gráinne (who she refers to as ‘G-Bomb’) to quit smoking, her knack for storytelling is apparent and often infused with references to ‘G-Bomb’ and Dad Alan, whose two elder daughter’s Lorna and Fiona both live in Dublin.

‘G-Bomb’ features heavily on Sarah’s Instagram account, as her youngest daughter films herself asking for life advice. Amusingly, these tongue-in-cheek video interviews led to Sarah and her parents featuring on dating show Pulling with My Parents in Ireland.

“Ah, god, do you know how much I got teased for that at the club? I thought it’d slip under the radar because it was in Ireland” Rowe said with a laugh.

“It was absolutely hilarious, I talk to my parents like they’re my best friends so they weren’t shocked at anything in the show. We did not take it seriously at all, if anything it made us all want me to find love less.”

Despite her seemingly carefree manner, Rowe admits living between two worlds has its challenges for relationships, both romantic and otherwise.

“I did do a long-distance relationship for two years and it was unfortunately the start of the end, unless someone was going to make a compromise, and you just can’t ask someone to live in two places a year,” she said.

On maintaining close friendships, Rowe said: “You feel like you’re always a part-time friend. You’re there one minute then you need to switch back into your life back in Australia and give them time too, and you don’t want to be on your phone the whole time to home either. My close friends and family have to understand.”

It’s a lot to grapple with and Rowe conceded “the older I get, the less tolerant I am of the lifestyle.”

“I know when I’m older I’ll reflect and know it was the best time of my life. I just appreciate being here so much,” she said.

“So, for now, I think I need to keep going until it doesn’t feel right anymore.”