Ryan James has come out of retirement to solve the front-row shortage for the Indigenous All Stars – and for one last time represent his people who still struggle with Australia Day being celebrated.

James called time on his 168-game NRL career last season, but made a point of contacting Indigenous coach Ron Griffiths to let him know he was still available for the February 11 clash against the Maori All Stars. 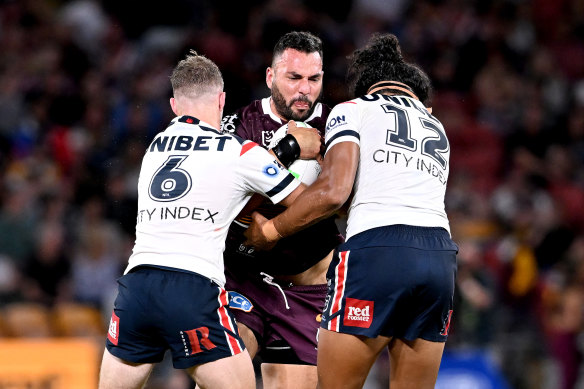 Out of retirement: Proud Indigenous All Star Ryan JamesCredit:Getty

The 31-year-old front-rower is training three days a week with Queensland Cup side Tweed Seagulls while completing his university studies. He was at university last week when Griffiths and Indigenous league legend Matty Bowen sent him an SOS, and “was glad nobody was near me because I became a bit emotional”.

Seeing James one last time play for the Indigenous All Stars will be special for his loved ones – but the same cannot be said for our contentious national day.

Despite rugby league doing its best to raise awareness about Indigenous culture and racism, James said January 26 would never be one that is celebrated in his home.

“I was lucky to grow up with a strong culture, but I also saw how much my family hurt when days like this were celebrated; when something so terrible happened in the past,” James told the Herald. 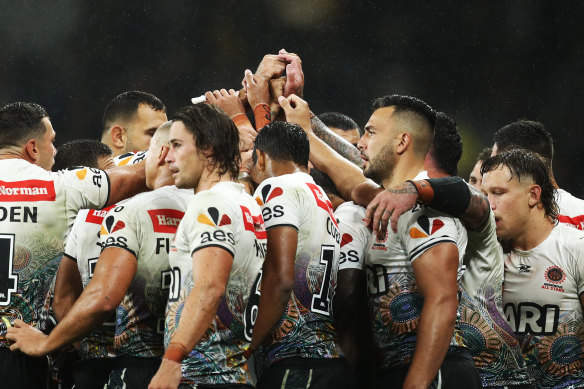 Ryan James with his Indigenous All Stars teammates last year.Credit:Getty

“It still hurts. As a kid you never realised why. You grow up knowing you’re Aboriginal. But then Mum [Terri-Lee] sits you down and says, ‘I didn’t have any rights in this country until I was seven years of age’.

“Mum told me she basically had the same rights as a tree, or ‘flora and fauna’.

James, 31, has always been passionate about representing the First Nations people, and remains a member on the NRL’s Reconciliation Action Plan working group.

He famously wanted to wear Sydney Swans’ Indigenous idol Adam Goodes’ No. 37 one year in the All Stars, only to be ruled out with a knee injury.

James had not given much thought to donning the famous number in Rotorua, but was open to having the conversation with Griffiths.

For all the excitement in the backline – think Johnathan Thurston, Greg Inglis, Preston Campbell and Bowen – over the years, the Indigenous side has traditionally struggled up front. James was plucked out of retirement, along with unheralded Queensland Cup prop Bailey Butler.

“I get to play for my people, everything I’m doing outside of football now is for my people, and I also get to spend the week with a great bunch of blokes.”

James, who is finishing a masters degree in business administration, joins Latrell Mitchell, Nicho Hynes and Jack Wighton in the Indigenous team. The Maoris, who will have the support of a local crowd, feature Sydney Roosters pair Joey Manu and Jared Waerea-Hargreaves, along with Penrith’s James Fisher-Harris.