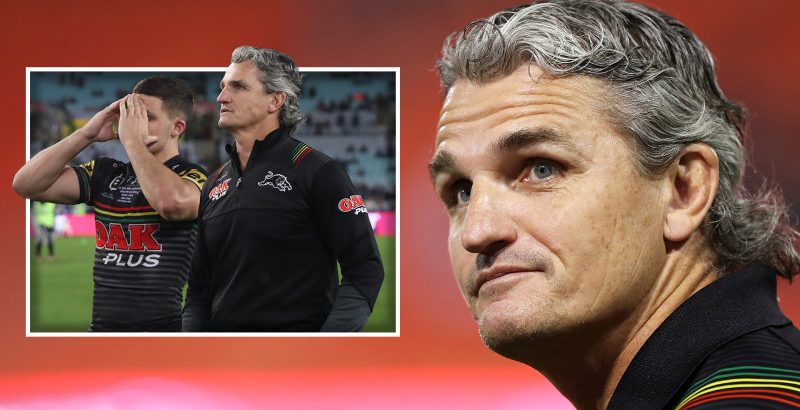 Panthers players sang happy birthday as Ivan Cleary celebrated turning 50 on Monday. He walked out and pretended to raise a cricket bat to the adoring crowd, his silver hair flowing in the breeze. Somehow, it gets better each year.

Then you sit down with the Penrith coach and ask him how long he plans to keep coaching. Until you’re 71 like Wayne Bennett? 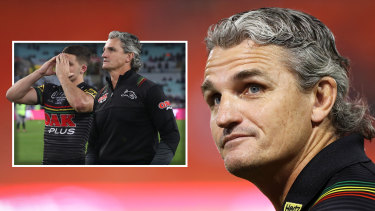 Ivan Cleary is yet to win a premiership as coach, but went close with the Panthers in 2020.Credit:Getty, Getty

Cleary has coached 342 first-grade games. The dozen coaches who sit above him on the all-time list have won premierships, except for Brian Smith, a somewhat mythical figure in the game for his ability to get close but not get his team over the line.

No coach wants to be mentioned in the same breath as Smith when it comes to lost opportunities, and plenty of good judges and bookies are tipping Cleary’s long wait will end this year.

“Of course I’m keen for it to happen,” Cleary says. “I’ve been involved in this game a long time. I’ve gone close. I’ve been in and around the semis a lot as a player and a coach.

“I just haven’t been able to quite climb that mountain yet.

“At the end of the day, it won’t define my life. It’s not the exclusive reason I get out of bed. But it’s something I definitely want to do.

“I’m confident I can be part of a premiership team one day.”

The only premiership Cleary won was as reserve grade coach at the Roosters in 2004. The likes of Ben Hannant and George Rose played that day.

Last year’s defeat to the Storm hurt but Cleary claims it has left no lasting mental scars. He knows they were outplayed. Inexperience is a word he has used several times.

“And there’s only one way to get that experience,” he says. “When you’ve been in a grand final you definitely want to get back there. 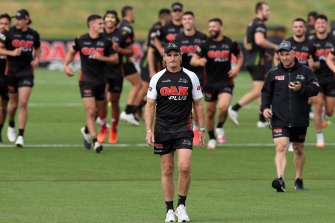 Ivan Cleary knows his young Panthers side was outplayed in the 2020 grand final, but will be better for the experience.Credit:Getty

“But on both occasions for me, back in 2011 and last year, as a coach there’s nothing I would have done differently. It would have been worse if I looked back and thought to myself, ‘I didn’t get this right’.

“We were confident going into last year. We respected what Melbourne brought, but we had won 17 in a row, beaten the dual premiers and Souths, who were the form team of the comp at that point in time. We didn’t beat mugs to get there. We hadn’t lost in four months. We’ll be better for it.”

Cleary knows he is a better coach 12 months on. The Penrith players certainly respect what Cleary is doing for the club as well as the community.

Five-eighth Jarome Luai, dubbed the “cultural architect” by the coach, loves Cleary’s speeches at any given captain’s run.

Most games coached in first grade

“They’re so good I’ve told Ivan he should start his own YouTube channel for motivational speeches,” Luai says with a smile.

Ivan’s son Nathan, the club’s superstar No.7, knows better than most how badly his dad wants some silverware.

“He’s hungry every year,” Nathan says. “The main goal is to win the premiership. Everyone here shares that vision and goal. Getting so close last year only fuels you that bit more to win one. It’s a dream of mine and dad’s and the whole team’s.”

Ivan Cleary says he has questioned himself three times during his NRL coaching career. He preferred not to expand on those dark times, but one of them was without doubt his return to the foot of the mountains in the summer of 2019 when the sex tapes scandal rocked the club.

“When it’s not going as good, you’ll ask yourself, ‘Why are you doing this?’,” Cleary says. “There have been three times I can remember when it’s been really difficult and it becomes a bit overwhelming. My first year back here was very difficult.

Cleary continues to make some tough calls. He is refusing to release Matt Burton to Canterbury this year. The Bulldogs keep barking. Loudly.

“He loves it here. He’s a big part of what we’re doing here this year,” Cleary says of Burton.

He also made the call not to select Brent Naden for the opening month following his cocaine positive on the night of the grand final. Naden had no say.

“It was my decision, it wasn’t the club’s because they had already dealt with Brent,” Cleary says. “And Brent endorsed what we did.”

Cleary has lost plenty of experience with James Tamou, Zane Tetevano and Josh Mansour all finding homes elsewhere. The coach said the loss of the older heads meant his younger players would have no choice but to take on more responsibility.

“I think some of our young guys are entering the sweet spot in their careers,” he says. “They’re in their early to mid-20s, they’ve played a fair bit of footy together in first grade and other grades. The fact we’re now missing older guys allows the leadership to come from younger men. There’s no hierarchy. I’m happy with what we’re seeing.

“I’m confident about what this group can do. We’re chasing something new now – we’re not trying to live up to last year.”

Cleary farewells a few of his players as the chat on a warm afternoon finishes. He then steps back inside the Panthers Academy to blow out the candles on his cake. You don’t have to be Brian Smith to work out what he was wishing for.