Much has already been written about that conversation between Johnathan Thurston and Phil Gould.

The one in which the wily old coach, witnessing a career at a crossroads, put the challenge to the sometimes errant star.

History shows that Thurston, with those words ringing in his ears, went on to maximise his potential and become one of the all-time greats. At the time, Thurston took the advice as a prompt to harness all of his natural footballing gifts. However, his is now a legacy that transcends rugby league.

“I’ve been able to reflect on my life since playing footy and that was one that stands out for me in my life, that discussion,” Thurston said.

“That was what I needed at that stage of my life. It certainly opened my eyes, that question of what I thought of myself and how I wanted to be remembered. That’s where it all started really.” 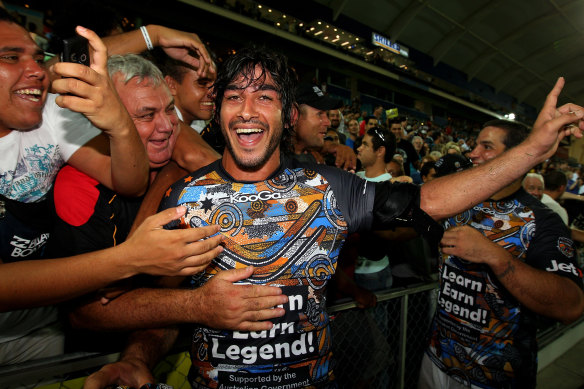 Thurston’s footballing feats will live forever; it appears only a matter of time before Immortal status is bestowed upon him. However, the former Cowboys captain will be remembered for much more than what he did with the Steeden.

The two-time premiership-winning half has used his platform to assist Indigenous Australians to fulfil their potential, whether it be through programs at the Johnathan Thurston Academy or by sharing his own story.

“I’m proud, that’s my passion, to help the next generation of our culture,” he said.

Thurston was speaking after participating in a “talanoa”, a yarning circle conducted at Nine Entertainment Co – owners of this masthead – with the Channel Nine footballing commentary talent. It was an opportunity to acknowledge and celebrate the contribution of Pasifika, Maori and Indigenous talent in the NRL and look at ways to ensure voices from those communities could be heard.

“The NRL is 10 to 12 per cent Aboriginal and nearly 50 per cent Pacific Islands,” Thurston said. “It’s a high representation for the game of rugby league.

“Our role here is to be storytellers. Indigenous storytelling is a big part of our culture, especially in dance. If I feel there is an issue I need to speak up on, I have an incredible platform to do that through not only Nine but what I’ve built up over the past 25 years.

“It’s about educating people as well, starting conversations that are important.”

The Manly rainbow jersey saga is a perfect example. It is an example of a club, despite the best of intentions, dividing rather than uniting its key stakeholders due to a lack of engagement. Seven Sea Eagles players chose not to participate in a crucial game on religious and cultural grounds. Thurston wasn’t asked to wade into the debate, but believes better outcomes can be achieved by properly consulting all parties affected, particularly the Pasifika participants. 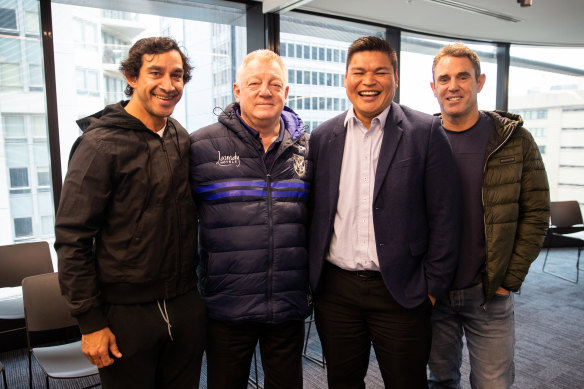 “No one is a mind reader,” he said. “When you’re making decisions that impact individuals, you need to do it with an open mind and with consultation to make sure everyone is on the same page.

“Certainly it’s started conversations, not only in rugby league but socially throughout the country. Despite what has happened, hopefully there’s a positive movement from it.”

The yarning session was facilitated by Dr David Lakisa, who has partnered with the NRL to set up Pasifika and Maori advisory groups. The initiative provides a voice for a large part of the men’s and women’s playing groups and seeks outcomes that range from the correct pronunciation of player names to providing cultural safety in the workplace.

“Organisations need to capture authentic voices,” Lakisa said. “It’s about authenticity and respecting the shared space. In Pacific terms, it’s called ‘va’, the pan-Pacific equivalent to a yarning circle is talanoa, which means to exchange stories, ideas, skills and experiences in a culturally safe way.

“Conversation starters is one thing – it needs to move to collaboration and competency and contribution.”

Almost half of NRL and NRLW players are Polynesian, but there is little representation at the coaching, management and board levels of the game. The NRL hasn’t had an Indigenous coach since Arthur Beetson.

Thurston knows the game can provide opportunities that change lives. He grew up idolising the great Indigenous Raiders champion Laurie Daley and is humbled to see his name now plastered across the jerseys of youngsters.

“Definitely, I’ve always said that rugby league has given me so much,” Thurston said.

“It’s given me a platform to create social change. It’s certainly the game that keeps on giving. It’s a wonderful platform to use. Life could have been very different for me.

“I’ve got some incredible memories from rugby league and I’m blessed to be involved in some capacity. Australia is a multicultural society and the game has a heavy Pacific Islander influence and Indigenous players have contributed to the game.

“If you have a better understanding of the history of our nation, it’s a very tough conversation to have.

“We’re starting to open people’s minds up to it, but we’re heading down the right path.”