Haumole Olakau'atu may be related to Jason Taumalolo, but if it was up to his mother he wouldn’t be following in the superstar forward’s footsteps.

Olakau'atu will make his NRL debut in a sudden-death finals clash for Manly on Saturday, his call-up the result of an injury crisis to Des Haser’s side. The 20-year-old will line up alongside lifelong friends Manase Fainu, Moses Suli and another debutant, Tevita Funa. 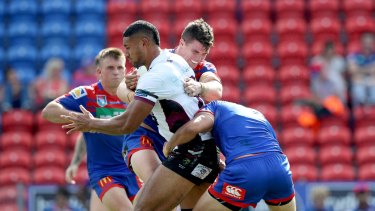 “Whatever Manase is planning and doing, ‘Mole will do it,” Anna said.

So he had a go. Turns out Olakau'atu, who now stands at 196cm and weighs 113kg, was pretty good at rugby league as well. He made the Sea Eagles NYC team and on Saturday will get his chance with the big boys.

That he will get to debut alongside his closest friends, in a finals game no less, will make the occasion even more special.

“They are all very close, Moses, Manase and Mole and Tevita Funa,” Anna said.

“They used to play together ever since they were four years old.”

Good judges have compared Olakau'atu to a young Taumalolo and it turns out they are related.

“We only see each other when we have a family reunion because I come from the Taumalolo family.”

There are other talented footballers in Olakau'atu’s family. His father, Ofa, represented the Tongan national team in rugby sevens and his younger brothers were gun league players.

“The other two (brothers) used to play very well but go into too much trouble playing football, they would always fight,” Anna said.

“The second brother got a ban from Manly as well. He got into a big fight and got caught on camera that he kicked someone. His penalty was 15 years, but I think it is 10 years now. But he is the best player.”