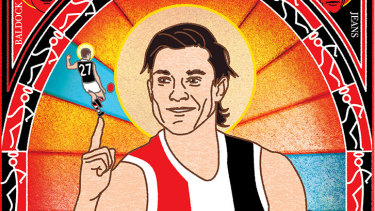 Yes we can: St Kilda head into the finals with 2020 All-Australian Jack Steele (illustration: Jim Pavlidis).Credit:

There have been periods in the Saints’ history that have been so difficult, such as the time during the 1980s when they collected five wooden spoons in 6 years, that supporters have needed to display immense loyalty and the patience of a saint to get through.

There is a patron saint of hope, St Matthias, who replaced Judas Iscariot among Christ’s twelve apostles. 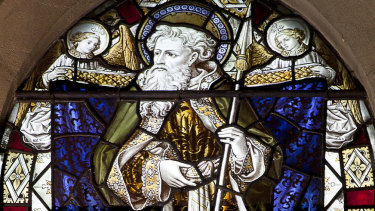 Until his retirement in 2016, St Kilda’s hopes lay with Nick Riewoldt. That mantle has now passed to Jack Steele. In his first season at St Kilda in 2017, Steele laid 158 tackles in 20 games, including 17 in a single game against Fremantle, and this week became the first Saint in six years to make the All-Australian side.

Next weekend his team face the Western Bulldogs in an elimination final, and will be hoping against hope it’s the first step to a storied premiership.

Click here for a full poster-sized image of the Saints 2020 finals special (to download to your desktop once open, right-click and choose 'save image').

Ronaldinho positive for Covid-19 as Brazilian films message for fans