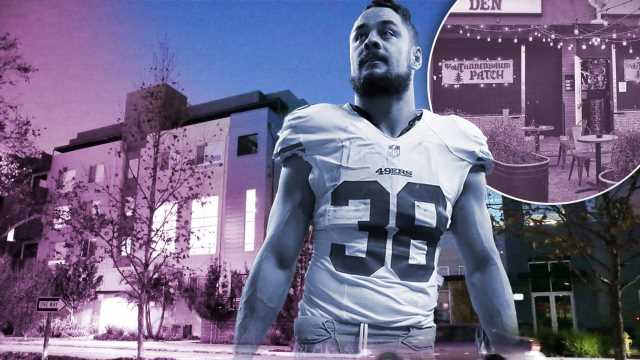 The shock announcement Jarryd Hayne was abandoning his widely celebrated attempt to crack America’s National Football League came just days after police questioned him about a young woman’s claims she had been sexually assaulted.

The Sunday Telegraph can for the first time confirm that Hayne’s departure from the US to try out for Fiji’s Rugby team in May 2015 followed an approach from San Jose police.

The rape allegations came to light in 2017, when Hayne was already back in Australia, playing his second season with the Gold Coast Titans. The woman sued Hayne, after authorities said they did not have enough evidence to lay criminal charges.

But San Jose police had interviewed Hayne and several teammates 19 months earlier, when the woman known as JV first made a complaint.

Jarryd Hayne said he wasn’t going anywhere shortly before he met the young woman at the Willow Den. Picture:Source:Supplied

“He left quickly after she made her complaint and after the police reached out to him,” a source close to the initial investigation said.

“I can tell you there were others on the team who were interviewed or had requests made to interview them before May 15 (when he announced he was quitting).”

The source said they believed the 49ers organisation, which had been dealing with several other legal controversies involving players at the time, was also aware of the police investigation.

Just 13 days before the young woman alleges she met the two-time Dally M medallist inside San Jose dive bar, Willow Den, Hayne looked down over San Francisco’s Golden Gate bridge and, in an interview with The Daily Telegraph, said, no, he wasn’t going anywhere.

Inside the Willow Den bar.Source:Supplied

“There have been a couple of dark days,” the 49ers punt returner conceded as, dressed in his signature clothing label, he posed for photos at a popular Bay Area lookout.

“But this is where I want to be.

“Because for the normal person, if you’re in a situation like I am, the response would be to go into your comfort zone and return home.

Less than two weeks later, and just four days before Christmas, Hayne was out drinking with teammates near his San Jose townhouse after watching from the sidelines as his 49ers were beaten 24-14 by the Cincinnati Bengals.

One of those teammates was texting back and forth with a young local restaurant worker, who herself had watched part of the afternoon game before heading first to a restaurant and then to a nearby dive bar. The woman, JV, told Hayne’s teammate where she and her friends were partying and the Aussie arrived soon after with a small group of 49ers.

The Willow Den was a rundown neighbourhood bar with graffitied ceilings and a shuffleboard table, and the group got comfortable there as they drank the night away.

JV’s friends later told police they had never seen the woman, a churchgoing Christian in her
mid-20s, “so intoxicated”.

She and Hayne hardly spoke at the bar, having “minimal interaction” according to police, but that didn’t stop them leaving together.

Part of Hayne’s defence to the rape charges that she would later pursue was that JV had called the Uber that took the pair back to his apartment. But JV told police she was so drunk she “passed out in the car due to her extreme level of intoxication”.

“The only thing Plaintiff recalled from the car ride was that once outside Defendant’s home, the vehicle’s interior light shined in her eyes,” when Hayne opened the door, her attorneys said in their suit.

They said she had “no recollection” of getting into Hayne’s home and that her next memory
was “seeing a silhouette of a man with Defendent’s build coming towards her”.

“The man put his hands on her shoulders and flipped her around so she was no longer facing him,” the suit alleged.

JV, who later said she was a virgin who had been saving herself for marriage, heard the words “no kissing” before feeling “extremely sharp pain in her vagina”.

“Plaintiff had never had vaginal intercourse, consensual or otherwise,” her lawyers said.

She said she recognised Hayne’s voice and that her “last memories were falling face down in the bed, seeing a light from the hallway, and the continued sharp vaginal pain”.

The young woman was still in pain when she woke up alone, naked under a sheet, next to a puddle of blood. Some of Hayne’s clothes were on the floor and although she was “in shock and wanted to leave”, she grabbed some of his underwear because “if she reported to the police she would need some kind of proof”.

Hayne’s defence contended that she had spoken calmly to his flat mate when she left and hadn’t appeared upset.

But when she got home, JV said she was too scared to go to authorities because she “had heard of many cases, especially involving high profile athletes, where victims were discredited and even blamed for reporting sexual assault”.

PODCAST BONUS: THE RISE AND FALL OF JARRYD HAYNE

Having previously suffered depression and anxiety, she “worried that she would be an easy target for victim blaming”.

Instead she told two friends about the alleged assault and tried to seek out Hayne.

Hayne denied to her friend that anything happened but when JV approached him on Instagram and “asked him to tell her what happened and why he would do that to her”, the footballer responded that they had simply “hooked up”.

JV said she was too frightened to come forward but suffered vaginal pain for months afterwards.

In April 2016, she was examined in a hospital emergency department, where concerned doctors called police to her bedside but she declined to be interviewed.

In early May, encouraged by a doctor and friend, the woman filed a complaint to San Jose police. On May 15, Hayne sensationally announced he was leaving the 49ers to pursue a spot in Fiji’s Olympic Rugby side.

The case was settled with no admissions for close to $100,000 ahead of a trial scheduled for
last January.

Two sources close to the investigation confirmed to The Sunday Telegraph that police tried to interview Hayne, as well as teammates who had been drinking with him and JV at the Willow Den dive bar earlier that night.

“The police spoke to these other witnesses before he abruptly left the country,” the source said.

All of which seemed unthinkable that day overlooking the Golden Gate Bridge.