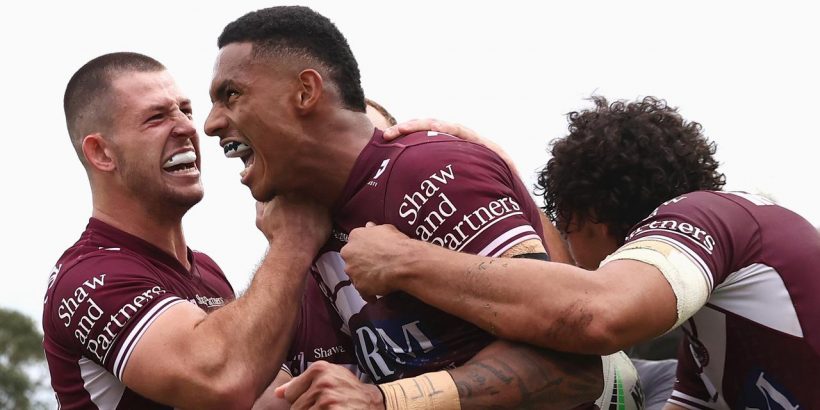 Jason Saab says his early season form was so bad that he wasn’t sure whether he was good enough for reserve grade, but the Sea Eagles winger has turned the corner and is flying high after honest discussions with his dad and Des Hasler.

His decision to leave the Dragons last year due to the long drive to Wollongong for training was heavily criticised, but there were other factors at play.

Saab was keen to play with his best friend, Keith Titmuss, but that dream was cut short when the young forward tragically passed away last year.

“Playing back at school was the best footy you could play because you just play with your mates. That’s what I wanted to do by coming here because we’ve got a few Westfield boys here as well which gives that same feeling.

“At the start of the year it was obviously shaky and it was hard to see, but I can probably look a bit further into the future and realise what a good thing I have going here and just roll with it and continue to grow.”

After making the move in the off-season, Saab failed to fire in the opening month as his form mirrored the side’s winless start to the year.

There were reports the winger would be dropped after he failed to score in the first four games, but a frank conversation with Hasler put those concerns to bed and gave him the confidence to be the man the Sea Eagles were so desperate to sign.

“It wasn’t said to me that ‘you’re going to play in reserve grade’. Des and I had an honest conversation and it had to do with being what a first-grader is and putting your body on the line,” he revealed.

“The honest conversation was basically ‘you can step up to the plate, or you can let it discourage you’. Since that point, I’ve worked on it and improved. I just want to stay here – that’s my goal.”

Saab’s confidence was at rock bottom following a Round 4 hammering that saw Penrith pile on the points down his edge, and things got worse when his dad – who stopped father-coaching him at high school – asked to chat about his performances.

“He said ‘son, can I talk to you without you getting annoyed?’ and I knew straight away what was coming,” Saab said.

“He told me that it looked like I wasn’t putting my body on the line.

“It’s weird because when it comes from dad, I get a bit cut and hurt, but if Dessie says it then I’m sweet. He got up me and told me the way it was, but I already knew that.

“It ruined my Saturday. I know I’m not letting my family down, but I want to make them proud, so I carried that chat with me.

“You take a loss and another loss and you think ‘am I good?’. I’m the worst when it comes to head noise, ask anyone. I overthink and let it loop in my head all the time, but that’s something I’ve done since I was a kid.

“It’s been really good going there every week and knowing that Dessie has put his faith in me because it’s a new opportunity every week, whereas in the past, I’d have that worry that if I didn’t play well this week then I wouldn’t be picked next week.”

The rangy speedster scored the first hat-trick of his career in Manly’s thrilling win over the Warriors on Sunday, but it was a couple of late defensive plays that stood out, including a last-gasp effort to drive Ken Maumalo into touch to prevent the game going into golden point.

“Probably not – most definitely not, to be honest,” he replied when asked if he would have made that tackle earlier in the year.

“It’s not just that. It’s also the confident decision to slide off and go to the winger. At the start of the year I was a lost puppy. I probably would have jammed on Reece Walsh. It wasn’t just the tackle; it was getting the process right that I’ve improved on according to the coaches.

“For me, that’s the best game I’ve had in first grade.

“I was terrible at the start of the year and I don’t know if I’d have been good enough for reserve grade given the way I was playing. The sky is the limit, but I can’t get complacent.”