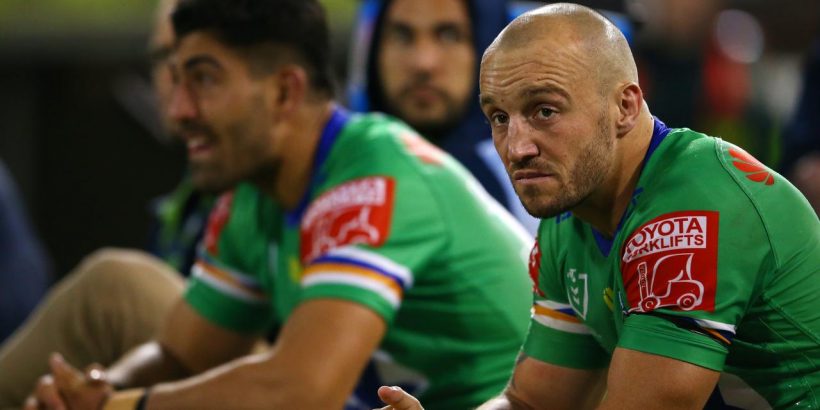 Josh Hodgson has denied his relationship with Canberra coach Ricky Stuart is damaged, but concedes his desire play for another “four or five years” could force him to depart the Raiders.

Speaking for the first time since relinquishing the Raiders captaincy last month, an honest Hodgson addressed the “hardest” decision in his career to remove the little ‘c’ next to his name.

The 31-year-old hooker has been named on the bench for Saturday’s Magic Round clash against Canterbury – his first game since injuring his calf in round 6.

Hodgson is contracted at Canberra until the end of the 2022, and the Raiders won’t release him at this stage, but he knows he may not be in the nation’s capital forever.

Josh Hodgson insists everything is fine at the Raiders as he looks to return from injury. Photo: Matt King/Getty Images.Source:Getty Images

The Green Machine is well served in the hooker role, with 22-year-old Tom Starling and teen star Adrian Trevilyan coming through the grades.

Hodgson accepts his goal to play past his 30s could result in him leaving the Raiders.

“I’m not daft – I know I’m an old bloke and I’ve been around for a while,” said Hodgson, who revealed his shocked UK family contacted him when he recently received interest from Brisbane and Canterbury.

“Tommy (Starling) has been playing some good footy and if he is the next generation, in terms of what we want to bring throughout the club, I’m fine with that.

“I love this club more than to let my own ego stand in the way.”

Hodgson employed the same mentality when he opted to stand down from the captaincy.

He said it felt like the “right time” to quit his leadership role, but he denied his decision prompted a tense confrontation with coach Stuart.

“Some of the stories were a little bit laughable saying that Stick and I were fighting and arguing and all of that,” he said.

“But when I stepped down it couldn’t have been any more amicable. We shook hands and had a pat on the back and just went about business as normal.

“Sometimes you’ve got to talk business, but that doesn’t affect your personal relationship off the field.

“So, Rick and I will never blue, in terms of a big way.

“But it certainly wasn’t a decision that I took lightly. I’m a big boy and I’m never going to back down to someone’s opinion and it went down as well as it could with Ricky and we left on really good terms after the meeting.

“But I’m a strong-minded person and when I make a decision, I’m going to stick to my guns.”

Hodgson refused to elaborate on his reasons for stepping down as captain, preferring not to add fuel to the story.

“Not really, but I’ve made a statement and we’ve had enough fires starting all over the place in the last few weeks,” he said.

“So, the last thing I need to do is start anymore.”