Seventeen years after he made his debut as a teenager, Karmichael Hunt is poised to make a comeback to the NRL with a return to the Brisbane Broncos.

Hunt is expected to join the club on a train and trial contract after playing with Brisbane’s feeder club Souths Logan in the Intrust Super Cup this year. 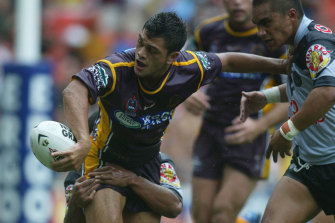 Karmichael Hunt playing for the Broncos in 2004.Credit:Getty

Nine News in Brisbane report that members of the Broncos coaching staff are impressed by the level of leadership and fitness the former State of Origin star has shown in his return, teaming up with Broncos halfback Tom Dearden to lead the Magpies to a 36-20 victory over defending Queensland Cup champions Burleigh.

Hunt began his career with the Broncos in 2004 at just 17 and now plans to return to Red Hill at the age of 34.

Hunt played his last game with the Broncos in 2009 before the former Kangaroo switched to AFL.

There he spent four seasons with the Gold Coast Suns before crossing over to rugby union in 2015 where he played with the Queensland Reds for another four seasons. He then joined the Waratahs in 2019 before recently transitioning back into the world of rugby league for 2021. 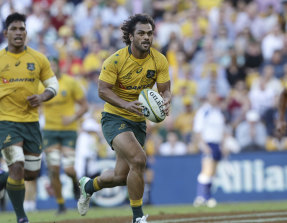 Karmichael Hunt playing for the Wallabies against Italy in 2017.Credit:Getty

Hunt’s manager David Riolo confirmed the former Wallaby was in talks with the club but said the deal was yet to be completely finalised.

Hunt said recently he was keen to help the Broncos and return to the NRL.

“I’d love to play professionally but I’ve been out of the game for 11 years. Maybe it’s a young man’s game now, who knows? I’m just going to play and see how we go,” Hunt told the Courier Mail.

“If it happens it happens. If it doesn’t, that’s OK.

“I’m pretty old in league terms but the body feels good. The last five years in rugby weren’t the most consistent in terms of playing so my body feels fresh.”

The Broncos have had a woeful start to their 2021 season with just one win from the first five rounds.

The effort has seen coach Kevin Walters drop Anthony Milford in the reserves for the first time since his career began at the Raiders nine years ago.

“It’s always difficult telling players they aren’t in the side but it’s part of my job. It’s not something I enjoy but it’s something I have to do,” Walters said on Wednesday.

“He handled the decision very well and I thought he had his better training session after he was told. So that’s always a good sign of someone who wants to get better.”

The potential return of Hunt will add even more pressure on Milford, who is off-contract this year, with the new recruit expected to slot into the halves upon his return to Red Hill.