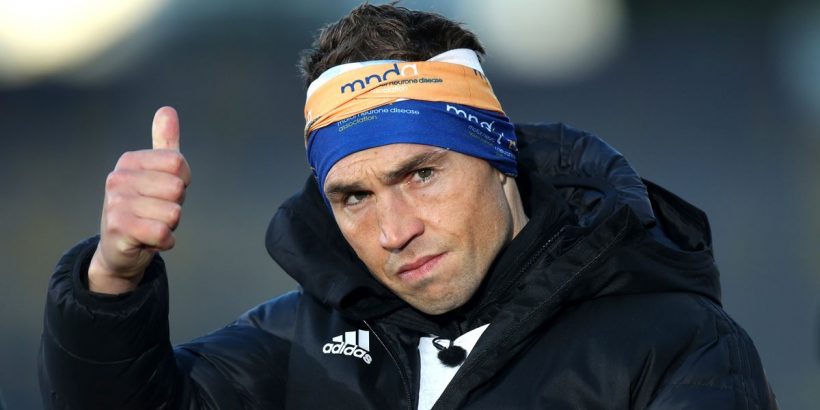 Rugby League coach Kevin Sinfield has quashed talks of a knighthood following his exceptional efforts to raise money for research into motor neurone disease – and called on the Government to fund research into the condition.

Sinfield raised an exceptional £1.5million to support MND research in support of his former teammate and MND sufferer Rob Burrow by running 101 miles in 24 hours. The 41-year-old was awarded an OBE in the summer after raising more than £2.7m by running seven marathons in seven days.

As a result of his heroic efforts, many have called for Sinfield – nicknamed ‘Sir Kev’ by Leeds Rhinos fans – to receive a knighthood.

Boxing icon Frank Bruno said he hoped the honours committee have been following Sinfield’s achievements, while Manchester mayor Andy Burnham said: “To the powers that be in this country… I know a lot of people want to see that and here those immortal words, ‘Arise Sir Kevin’.”

When asked about the prospect of being knighted due to his fundraising efforts, the Leicester Tigers admitted interest but selflessly insisted on more help fighting MND from the government.

“It’s really nice but I’d much rather the government keep giving funds to MND and to try to find a cure,” Sinfield said.

“It’s not about that. The big driver is the Rob Burrow Care Centre in Leeds. It’s really important to all of us.

“The sooner we can get that open the better.”

Sinfield finished his remarkable run from Leicester to Leeds inside 24 hours on Tuesday morning and revealed he was ‘a bit broken’ on Wednesday – ‘but it was worth every step’. The challenge was split into seven kilometre sections.

He told BBC Breakfast that he will return for another fundraising challenge next year after thinking of something appropriately creative.

Burrow was diagnosed with motor neurone disease in 2019 and given just two years to live. The wheelchair-bound Rugby League legend was at the finish line to welcome Sinfield home alongside Burrow’s wife, Lindsey, and their three children. His oldest daughter Macy joined Sinfield for the final few steps as he crossed the line on the Headingley pitch.

The extraordinary effort left Sinfield weak and physically ill, and he has been urged to reduce such feats after he struggled to speak to waiting reporters.

Do you think Kevin Sinfield should be knighted? Let us know in the comments section.

“I said before this that he's done enough. I think this is the ultimate one, I don't think he should even try anything like this again. But who knows with Kevin?

“We've all been part of a big family ever since the famous Leeds team achieved what they achieved, he's like another son to me. His mum and dad must be so proud, it's beyond words.

“It's difficult to take in. Whilst we all knew he would do it, the main thing is that Kevin took care of himself.

“The money is great but nowhere as important as Kevin's health. But he's done it, I don't know how.”