Knights  prop Jacob Saifiti was on a drunken bender but denies being aggressive before he was punched in the face by Dane Cordner, the older brother of Australian captain Boyd, outside a pub.

Dane Cordner has pleaded not guilty to causing reckless grievous bodily harm to Saifiti outside the Greenroof Hotel in Hamilton in late 2018. Cordner claims he was acting in self-defence. 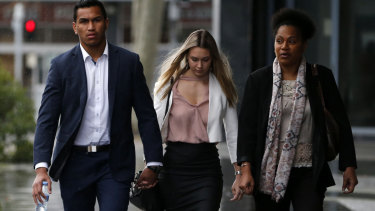 Saifiti, 23, told Newcastle Local Court on Monday he'd started drinking at a wine tasting event at 1pm and visited a number of hotels before being knocked to the ground by Cordner 13 hours later. He broke his ankle in the process.

The prop said on a scale of one to 10 – where 10 was staggering drunk – he was about a five or six when the altercation happened after 2am on December 2.

Saifiti told the court he'd been grabbed by the throat by another man outside the pub but didn't touch him when security separated them.

He claimed he then confronted the same man a short time later to tell him not to grab him again when Cordner pushed him in the chest.

Saifiti said he was confused and asked: "Cords, mate, what's up? What's going on?"

The Knights prop said Cordner told him to "f— off" before he punched him.

"I just remember walking up [to Cordner] and I woke up and I was on the ground," Saifiti said on Monday. 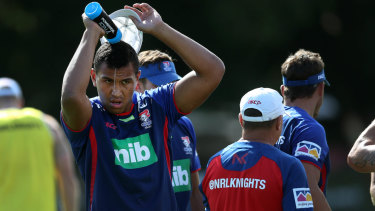 Saifiti suffered a broken ankle in the alleged incident outside a Newcastle pub.Credit:Marina Neil

The prop fell awkwardly and broke his ankle. He subsequently needed an operation where a plate and two pins were inserted.

"It put my footy career on hold for 17 weeks," Saifiti said.

Questioned by defence barrister Jack Tyler-Stott, Saifiti denied having attacked Cordner outside another pub in 2015, punching him and ramming his head into a signpost.

Saifiti admitted there had initially been bad blood between the pair but claimed they'd sorted things out.

Quoting from a show-cause notice report compiled by the Knights after the December 2018 incident, Mr Tyler-Stott said Saifiti and the senior playing group had been warned not to drink before going out that day to farewell a former teammate.

The report claimed Saifiti had, however, been encouraging younger players to go out drinking with him on the day and ended up behaving in a "drunken and outlandish manner" not befitting an elite player at the Knights.

When asked on Monday if he had been out to have a bender, Saifiti replied: "I was out to drink, yes."

Saifiti was later fined $50,000 by the club over the incident with half the fine later suspended.