Collingwood are planning to offer veteran midfielder Levi Greenwood the opportunity to play on in 2021 with the 31-year-old once again proving his importance to the team after returning from a knee reconstruction.

He was an important cog in the Magpies’ upset elimination final win over West Coast in Perth as he restricted prime ball-winner Tim Kelly to just 12 disposals while grabbing 13 touches himself, including several imporant possessions late in the tense final. 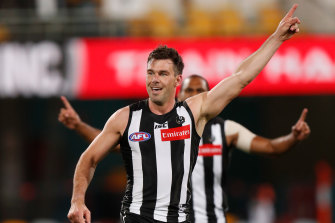 Levi Greenwood is set for a contract extension.Credit:Getty Images

The Magpies have several players in the twilight of their careers and are not expected to formalise any decisions on players such as Greenwood until well after their season. The signatures of several players from Saturday night's team such as Darcy Moore, Jordan DeGoey, Brody Mihocek and Josh Daicos are higher on their list of priorities.

Greenwood, however, has not put a foot wrong since returning in round 13, which came a little under 12 months after he injured his knee in last year's qualifying final against Geelong and required a knee reconstruction. He is expected to obtain an offer to continue his career into a 14th season, having not played a senior game in his first season with the Kangaroos in 2008.

Greenwood had a good record against Joel Selwood when the champion Cat was in the prime of his career but whether he is given the job to play on him again this Saturday night when the Magpies meet the Cats remains to be seen.

He has also been a good finals player in nine post-season matches across his 157-game career. His stopping job on Dustin Martin was vital in the Magpies' upset preliminary final win in 2018, while he was a key player when North Melbourne overran Essendon in the 2014 elimination final with 32 touches and a goal.

He is All-Australian midfielder Taylor Adams' business partner and the two are strong friends off the field with Adams and his senior teammates rapt to have the popular on-baller alongside him around the ball.

Greenwood crossed to Collingwood in 2015 for a pick received when Dayne Beams – now back on Collingwood's list – decided to join the Brisbane Lions. That trade netted the Magpies Greenwood, Jack Crisp and the pick used to select Jordan De Goey.