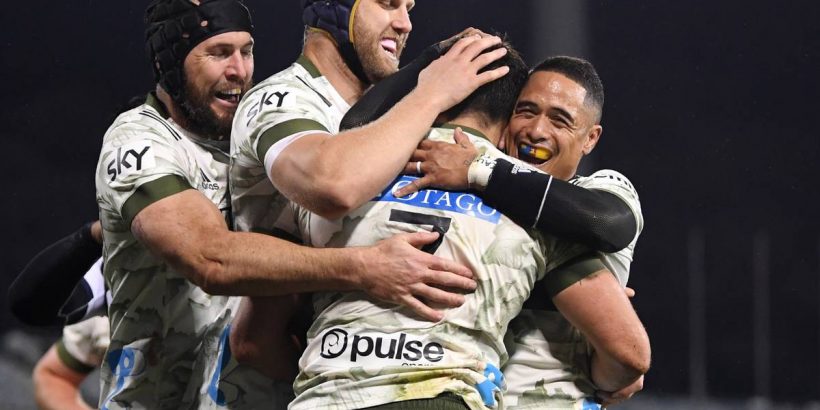 Underestimate the Highlanders at your peril.

The narrative surrounding Saturday night’s transtasman Super Rugby final at Eden Park has been largely fixated on the Blues’ quest to end their 18-year title drought.

That script, however, should come with a warning for Aucklanders: “Beware alternate ending.”

The Highlanders should be among New Zealand’s most celebrated rugby teams.

Over the past seven years, since Tony Brown arrived to join forces with Jamie Joseph, the Highlanders have forged a reputation for carrying a chip on their shoulder and regularly achieving feats deemed well beyond them.

They often recruit second or third choice players for other Kiwi franchises and buff them into rough diamonds – Waisake Naholo, Malakai Fekitoa, Mitchell Hunt to name a few.

Based in Dunedin, a small city even by New Zealand standards, has helped shape the culture and identity of a team that plays for its region and each other. No matter where athletes originate, they blend and bond together to form a patchwork quilted unit.

Possibly the best illustration, but not nearly the only example, of their inherent tenacity came in 2015 when no one gave the Highlanders a chance of capturing their first and only Super Rugby title.

They finished fourth, beat the Chiefs in a home quarter-final, travelled to Sydney the following week and smacked the second-placed Waratahs 35-17 to qualify for the final in Wellington.

Everything was set up for the Hurricanes to finally claim their first, long overdue crown. The script was set – Hurricanes legends Ma’a Nonu and Conrad Smith would be farewelled in style. Until they weren’t.

Leading 13-5 at half time Aaron Smith famously emerged from sheds and yelled at his men “they said we couldn’t do it”.

The theme has been similar every season since.

While the Highlanders did not go close to reaching the Aotearoa final they were the only team to pull off a rousing victory over the Crusaders in Christchurch this year. And last week, when needed most, they produced arguably the performance of the season by thumping the Brumbies 33-12 to secure a bonus point win in Canberra that ultimately knocked the Crusaders out of contention for the transtasman final.

This week, everything is stacked in the Blues’ favour. Home advantage. Eight All Blacks in Leon MacDonald’s squad compared to Smith, the sole national representative from the southern franchise.

The Highlanders have suffered 13 injuries and overcome head coach Brown’s surprise departure to Japan before this campaign begun, too.

On paper at least, they have no right to win the final.

Yet this is exactly the underdog mentality the Highlanders love to embrace – and MacDonald knows it.

“They’ve got that identity around the battlers from down south that nobody rates,” MacDonald said this week. “They love that tag. It motivates them to get stuck in and prove everybody wrong. We’ve had that mantle a little bit ourselves, not been rated for a long time and having to prove ourselves.

“There’s two teams with a similar mindset. To try pick a final out of these two teams … all the games have been close. Contrasting styles, different strengths. It’s going to be an intriguing battle. Both teams are pretty desperately keen to be successful.”

While MacDonald was keen to extoll the similarities between the teams their major differences set the scene for a clash of playing styles.

Sure the Blues boast far more footwork and ball skills than South Africans but in Patrick Tuipulotu, Nepo Laulala, Karl Tu’inukuafe, Dalton Papalii, Akira Ioane they are huge men who will seek to physically crush the Highlanders – and take their time in doing so when in striking distance.

The visitors, conversely, will seek to play high tempo; to turn the big Blues pack around, offload in contact and run them off their feet. They will set up their favoured lineout drive and, no doubt, have a few Brown-devised set piece trick plays ready and waiting.

“When our pack is doing what they do well they’re definitely a handful but we’ve got some dangerous backs doing some good things with the ball,” MacDonald said. “We back ourselves; they’ll be buoyed from their win against us down there in Dunedin this year. That will be their blueprint I’m sure. We’ll be expecting a lot of the same.”

Setting aside the underwhelming context of the transtasman competition as a whole, a first title since 2003 would allow the Blues region to breathe a collective sigh of relief with the promise of better days to come.

But just because it’s not the Crusaders in the final, don’t for a second believe the Highlanders are not worthy.

Blues fans, consider yourself warned. Keep the celebrations on ice.