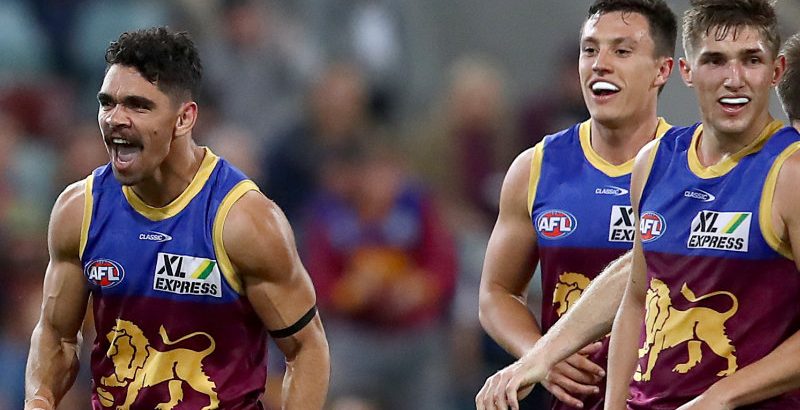 The Brisbane Lions are preparing to spend several nights in Victoria later this week to help ensure they can get into South Australia for Saturday’s match with Adelaide.

The AFL was on Monday night cautiously optimistic it would not need to change any further round 16 fixtures, despite the COVID-19 flare-ups around the country, with the Crows-Lions, Thursday night’s Gold Coast-Richmond, and Saturday night’s Fremantle-Carlton matches all poised to proceed as planned, at least for now. 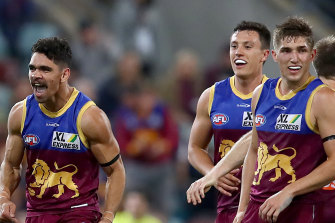 Charlie Cameron and the Lions.Credit:Getty Images

However, while the AFL has been hoping for confirmation that crowds at matches in Victoria will return to 85 per cent capacity this weekend – as had been flagged by the Victorian government last week – Geelong are preparing for capacity to remain closer to 50 per cent for Friday night’s Cats-Essendon game at GMHBA Stadium. That is the only round 16 match in which the 85 per cent threshold is likely to be needed.

The Suns had expected 5000 to 6000 mainly Richmond fans to travel for their game prior to the COVID issues. But they think the crowd will be fine, as per State of Origin.

AFL chief Gillon McLachlan said on Monday the league was not currently preparing for a contracted fixture block or a mass hub in Victoria but acknowledged the situation was subject to change quickly, with Sydney in lockdown and both Queensland and Western Australia having outbreaks over the weekend.

“We know we can do hubs, frenzies, all of those different things, but at the moment I don’t think that’s where we’re at,” McLachlan said.

“We are working with a changing environment and we’ve been doing that frankly for pretty much an entire AFLW season, and a men’s season.”

With the South Australian government on Sunday closing its border to Queensland, industry sources confirmed the Lions were planning on travelling to Melbourne on Wednesday before flying in and flying out of Adelaide on game day. It would be a similar arrangement to the one used by Collingwood and Geelong in recent rounds during Victoria’s fourth lockdown.

Fremantle have put ticket sales on hold for their match against Carlton at Optus Stadium, awaiting further guidance from the West Australian government. West Coast, having already copped the financial hit of their match against the Western Bulldogs on Sunday being closed to the public, are also hoping a 1000-person club corporate function at Crown Perth can proceed as planned.

There is, meanwhile, concern within AFL club recruiting ranks that next week’s national under-17 championships on the Gold Coast are also under threat.

Sydney, who along with Greater Western Sydney have been exiled to Victoria, have relocated 11 players who had initially stayed in Sydney last week to Newcastle.

The Giants’ round 17 home match against Gold Coast is increasingly likely to be played in Victoria.

“We had a plan to be away for a week, two weeks at the most. That’s what we would’ve liked to have done, when we had the three hours notice,” Swans coach John Longmire said.

“We’re just working through what to do with a few of those boys there who we’d like to get down as well.

“You really take it one day at a time down here when you’re in these sorts of situations. You try and live in the moment and you don’t project too far out.

“I think as soon as you start projecting too far out, you start talking about all the what ifs and which way it goes, and things change so quickly that you’ve really got to live in the moment.”

“When do questions seriously start getting asked of leadership across the board in this country?” Frampton tweeted.

“0 common sense shown and panic stations at the drop of a hat.”

The Bulldogs returned home from Perth late on Sunday night, just ahead of the 1am deadline in which the Perth metropolitan region became classified as an orange zone under the