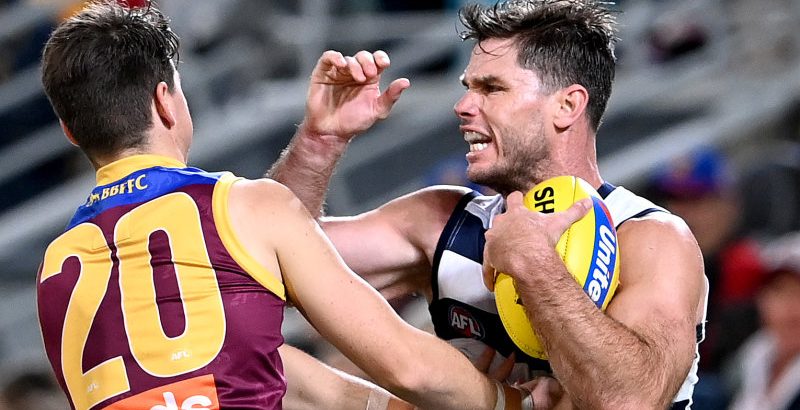 In last year’s preliminary final, and again in round two earlier this season in Geelong, matches between the Cats and Brisbane have seen the Lions bullied off the ball.

The Cats would win it in tight then, as is their wont, control the tempo of the game outside the stoppage. The Lions simply couldn’t get their hands on it. 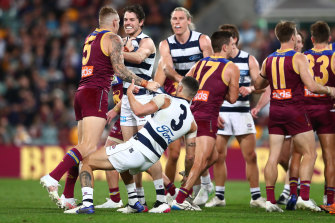 A scuffle breaks out early in the contest.Credit:Getty Images

So it was clear, from the opening minutes of Thursday night’s clash at the Gabba, Lions coach Chris Fagan and his match committee were ready to try something different.

The Cats still won the majority of the ball, inside and out. But the Lions counter-attack was hard, fast and ruthless, and they ran all over the Cats for a convincing 44-point win that should have been far more.

In doing so, they took third place on the ladder at the Cats’ expense. It was a big response, not only to those earlier defeats, but their loss to ladder leaders Melbourne two weeks earlier.

The Cats, coming off a last-kick win against the Western Bulldogs, looked shell-shocked by the onslaught.

A huge scare was sent through the home crowd early, with Lachie Neale popping his right shoulder when he was driven into the turf by Jeremy Cameron. 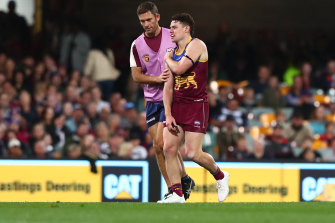 Lachie Neale was troubled by a shoulder issue.Credit:Getty Images

His night, and possibly next two months, looked over – but within minutes he was back, albeit obviously sore and unable to get into the game until late.

That the Lions won without major contributions from either their Brownlow medallist or Hugh McCluggage was a telling reflection of their versatility, hardness and tactics.

None of Geelong’s key weapons in Tom Hawkins, Jeremy Cameron or centre half-back Tom Stewart had an impact. Joel Selwood was held to 13 possessions.

Really, the game should have been over at quarter-time, the Lions stunning the Cats with an opening burst that yielded 11 scoring shots to one behind. The home team had a five-goal lead, but it could easily have been eight, with Charlie Cameron, Eric Hipwood and Joe Daniher all missing straightforward shots. 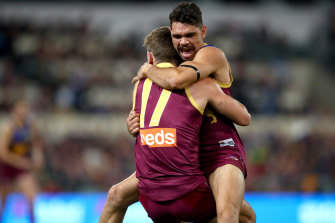 Charlie Cameron was lively in front of goals for the Lions.Credit:Getty Images

But in general play, the Lions pulled the Cats apart with a combination of intense pressure on the ball carrier and lethally quick ball movement when they forced the turnover. Chief architect was Daniel Rich, who kicked through the corridor low and flat at every opportunity, picking holes in the Cats’ defence.

Up forward, Cameron’s duel with Stewart was pivotal. Cameron made Stewart accountable, repeatedly dragging him up the wings and back to goal again, denying him the opportunity to intercept. Once the focal point in attack, the arrival of Joe Daniher means Cameron can now afford to drive opponents to distraction instead.

The Lions were also brilliantly led by captain Dayne Zorko. He typified the Lions’ attacking mindset, laying 12 tackles and providing a game-high 12 score involvements. Questions have occasionally been asked of his leadership, but no one can accuse him of going missing when it counts. 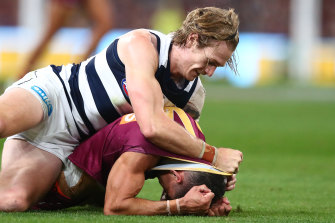 Tom Stewart had his hands full with Charlie Cameron.Credit:Getty Images

After tackling Stewart and winning a free kick midway through the second quarter, the match erupted: Cameron gave Stewart a shove to go on with; Stewart retaliated, and Cameron was gifted a 50-metre penalty. He missed the shot, but it disrupted the momentum of the Cats, who had kicked three quick goals to drag themselves back into the game.

By the third quarter, Stewart had been moved onto McCarthy. But the more defensively oriented former Cat wasn’t giving him an inch either, and the Cats, though they were able to slow the Lions down, weren’t able to make any headway.

And eventually, it was Cameron and Daniher who put the Cats away in the shadow of three-quarter-time. 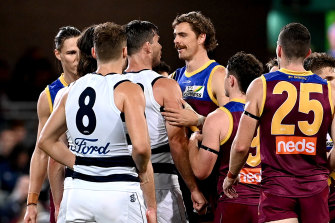 The energy went out of the game after that, late goals to Hawkins and Gary Rohan flattering Geelong, who face a potentially tricky assignment against Essendon next week.

The Lions will be wearing their share of ice, with Zorko and Dan McStay also taking knocks, but they’ll also take a huge amount of belief from beating their nemesis.