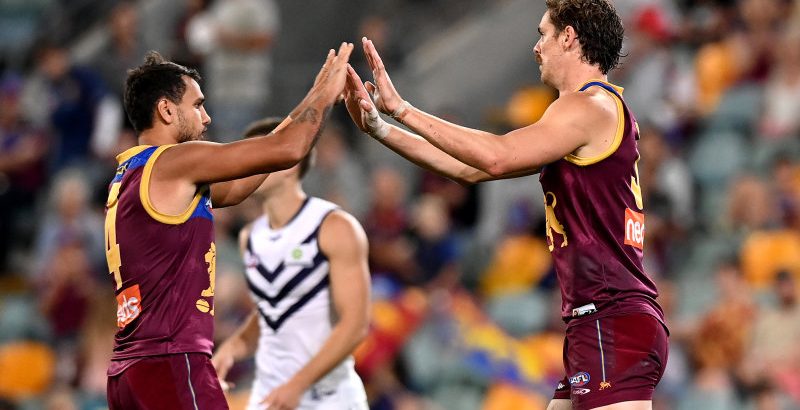 The Brisbane Lions were irresistible at times, sloppy at others but completed a victory over the Fremantle Dockers at the Gabba on Sunday night.

A five-goal opening term gave the Lions the advantage and they held control of the contest for the rest of the match as the ball-moving prowess of Daniel Rich (31 disposals), Jarryd Lions (30 disposals) and Zac Bailey and their potent forward line kept the scoreboard ticking over. 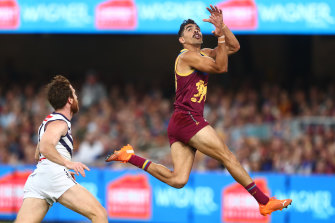 Charlie Cameron booted three goals for the Lions in their win over Fremantle.Credit:Getty Images

This wasn’t a sparkling display from the Lions but in a hectic, exhausting season there is value in a win where the team could work at a brisk pace plus have a few laughs while collecting the four points, and to do so without the injured Lachie Neale adds to the value.

Fremantle did cut the lead to 24 points late on but the result was an honest reflection of their current standing. They are a middle-of-the-road team with old stars, young talent and a very thin middle. 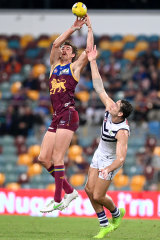 Outside of that group, James Aish, Matt Taberner, Michael Frederick and Nathan Wilson are all performing solidly, while most other positions in the side are up for grabs.

That inconsistency was reflected in this match as the Lions could stream quality players through every line on the field and the Dockers could only move when their old stars moved forward or their young stars could link together.

Lions defender Harris Andrews was too strong at the back, their midfield runners were powerful through the middle corridor or the wings and then Charlie Cameron and Eric Hipwood were causing trouble up forward.

Cameron’s third goal saw him bring out his revving the motorbike celebration, while Joe Daniher was looking for a big impact, almost completing a 70-metre kick for goal late in the third and taking a hanger over the back of a hapless Docker early in the last term.

Daniher even took an accidental climb on the goal umpire while trying to get hands on a kick for goal from Darcy in the final term.

Who knows if the Lions will be good enough to crack the top-four again but if they can handle games as comfortably as they handled this one, they should be fresh enough to give it a shake.

Sadly, the Dockers lost Frederick to a nasty syndesmosis injury which left him on crutches after half-time. 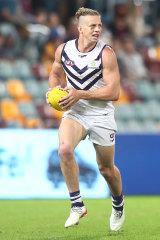 Nat Fyfe on the move for the Dockers.Credit:Getty Images

FYFE FINDS TARGET
Fyfe has had his struggles kicking for goal this season, with a 1.12 record heading into Sunday night’s match. He did convert a set shot in the third term which saw him sport a sheepish grin while celebrating but a mark 20 metres out soon after saw him miss the mark by some way.

He has been putting in the work on his kicking technique, even taking shots at goal after matches, but he’s yet to find a full solution for his woes.