Having been reminded, taunted and haunted for the last week and nine years about his team’s record in finals since 2011, Geelong coach Chris Scott must have hardly needed to rev up his team for their semi-final against Collingwood. He knew. Everyone knew. They had to win. Another straight-sets exit would be intolerable.

Called old and slow after last week’s loss to Port Adelaide – and there is no doubt about the first – the Cats attacked this game like their lives depended on it. Certainly a few careers did. The result was an emphatic 68-point demolition of the Magpies, setting up a preliminary final against Brisbane next week.

For Collingwood, who managed just one goal in three quarters, it was an abject humiliation after last week’s triumph against the Eagles in Perth. They’ve been a difficult team to watch this year – slow, defensive and reactive – and the confidence of some of their most talented players appears damaged. A reset is needed in 2021. 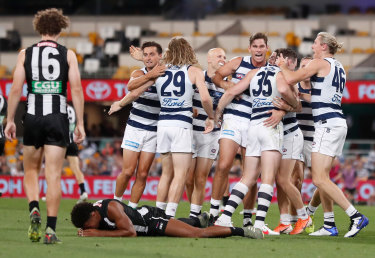 The result was set in stone within not much more than a quarter of football, the Cats leading by 54 points at the main break. Patrick Dangerfield and Tom Hawkins were brilliant, both kicking four goals; Mitch Duncan was prolific, and Lachie Henderson and Tom Stewart mopped up everything at half-back, taking 28 marks between them.

There was a frenetic sense of purpose to Geelong’s play from the first bounce. Collingwood attempted to reprise the daring they rediscovered against the Eagles last week, and lasted about eight minutes before wilting as the Cats quickly gained the ascendancy at ground level, and began beating the Pies up at ground level.

Soon they were cutting the Pies up, too. Gary Ablett made his first intervention, collecting the ball on the forward flank and putting the ball in front of Zach Tuohy. Soon, he had slipped clear again and found Gryan Miers, who notched Geelong’s third. Collingwood hadn’t yet hit the scoreboard.

By the end of the first, the Cats’ dominance was absolute: in weight of possession, in territory, and in effectiveness. They, too, were playing with a flair that too often has deserted them come springtime: they moved the ball quickly, and trusted their forwards to get the job done.

Within a little over a minute of the second quarter, the siren was ready to blow on Collingwood’s season. Dangerfield smashed a pack up forward; Hawkins took the crumbs to dish off the ball to Luke Dahlhaus for the Cats’ fifth. Less than a minute later, Dangerfield curled in a checkside from outside the boundary.

At that point, the Magpies had managed just the one scoring shot: a sharp goal to Jamie Elliott from a throw-in late in the first quarter. The tentativeness that has bedevilled their season re-emerged: a series of handballs backwards saw Jack Madgen pinned by Dangerfield, and an identical checkside from the same position as the first.

By then the game was done. Geelong’s lead was already out to eight goals; then nine, Cameron Guthrie drilling a long shot. Collingwood, at half-time, still had only Elliott’s major to their credit. The unlikely triumph of last week in the west was already a distant memory. Perhaps it had simply stretched credibility too far.

Geelong could afford to slow things down after that, and still Collingwood couldn’t find the ball. They didn’t score again until 15 minutes into the third quarter – a behind to Elliott, to go with his goal. The forwards could hardly be blamed: at three-quarter time, the Pies’ three top ball winners had it just a dozen times each.

Almost predictably, there were a few junk-time goals in the last quarter. But there was no disguising what had happened: this was a slaughter, the Cats adding six goals in the last themselves, with two apiece to Dangerfield and Hawkins, another, fittingly, to Joel Selwood. They may be long in the tooth. But they can still draw blood.