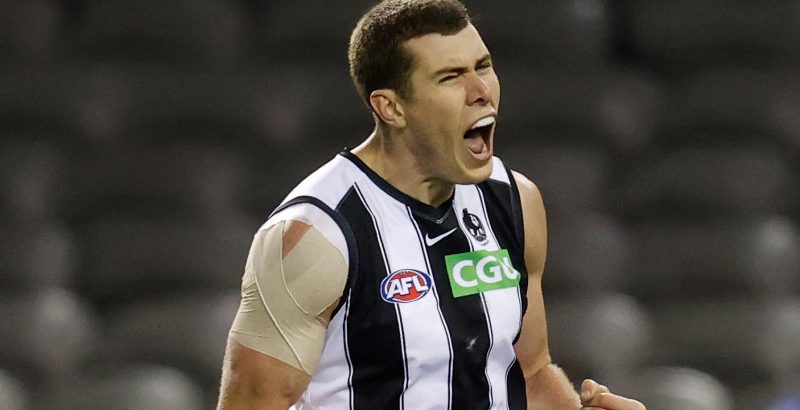 Cox, who turns 31 next March, had been left in limbo heading into the trade period, without a contract for next season. 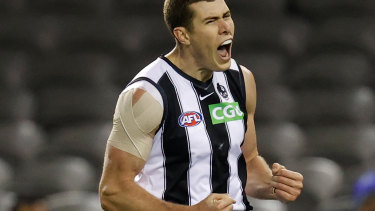 But the big man is now a required player at the Pies following the departure of Lynch, who was traded to the Hawks shortly before Wednesday night’s trade deadline.

“We’d like Mason to stay but that’s certainly up to him and he may have some options around that as well. But ‘Pickers’ and I had some conversations late yesterday. We’re hopeful but we’re mindful there could be others who have interest.

Pickering told AFL trade radio on Wednesday night that Cox had attracted interest from Fremantle over the weekend when the Dockers were canvassing contingencies for the possibility Rory Lobb would return to Greater Western Sydney, a move that did not eventuate.

Wright reiterated that the Pies were keen to retain Lynch, but understood why he would seek to get out of Brodie Grundy’s shadow.

“It was disappointing. There was a spot here for him. But we understood he wanted to explore the opportunity to be first ruck somewhere. Hawthorn have given him that opportunity, he goes with our absolute best wishes.

“We understood Brodie’s got a six-year deal, and when you’re an understudy, maybe you don’t see the light at the end of the tunnel.

“Just because Brodie’s got a six-year deal doesn’t mean he’s got a mortgage on the position … but everyone would say Brodie’s one of the best four or five ruckmen in the competition so it’s going to be difficult to push yourself past him.”

Wright said the Pies had largely achieved what they wanted from the trade period, landing Nathan Kreuger from Geelong, Patrick Lipinski from the Western Bulldogs and gaining draft points to match an expected early bid on father-son young gun Nick Daicos.

“We had clear priorities as we entered the trade period, with trying to bring Nathan in, and Pat, and we’re really pleased to be able to do that, but also to have enough points to match a bid for Nick. We were able to clear those priorities, we feel like we’ve got plenty of points,” Wright said.

Wright also confirmed that the Pies had become involved in talks with the Giants about Bobby Hill, who had been keen to move to Victoria, but that it was made clear to Collingwood that GWS wanted to retain the contracted small forward.

“We were involved from Friday. Not at as high a level as Essendon obviously, we think that was his preference, but we were certainly an option for him. We made a bit of a play at the end but GWS were very keen to keep him, he’s a high-quality young small forward.”