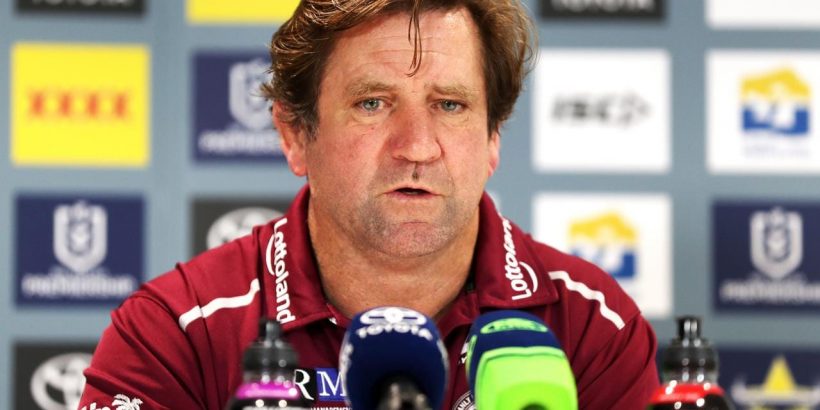 Manly ended months of uncertainty by announcing a new contract extension for coach Des Hasler last week — but the new deal has only plunged the club deeper into the mud.

Mystery surrounded the veteran Sea Eagles mentor’s contract for months before it was finally revealed Hasler has signed a two-year extention through to the end of 2023.

However, reports quickly emerged that the deal includes a clause that will allow Manly to terminate the final year of the contract if Hasler fails to push the Sea Eagles into the finals in 2021 or 2022.

Reports last week claimed Hasler can even extend to 2024 if the Sea Eagles become contenders.

The clause-loaded contract comes after Manly were belted in their season opened against the Roosters and were beaten in a Brookvale Oval quagmire by the Rabbitohs in Round 2.

How long Des Hasler is with Manly depends on how they go this season.Source:Getty Images

The complexity of the deal — and the Sea Eagles’ ability to effectively terminate Hasler’s contract at any time without suffering a massive pay-out — has left the contract described as “the biggest disaster I’ve ever seen” by Fox League NRL 360 co-host Paul Kent.

Kent told Triple M rugby league the fine print in the contract was “naive” and “dumb” from the club’s perspective.

“It’s the biggest disaster I’ve ever seen, that contract.,” he said.

“You don’t put performance clauses in saying the club can sack him. In the old days clubs would come out and say, well he’s got 12 weeks, or the board would say he’s got six weeks. What ends up happening, and I say this respectfully about Des, but if you’ve got performance clauses that you have to reach, you’ve got to be coaching towards them. You’re not coaching towards the long term success.

Des Hasler doesn’t appear to have the full support of the board, one week into a new contract.Source:AAP

“You take short cuts for the short term. It’s a dumb, dumb move. You either back the coach or you sack him. You don’t go half way.”

Kent said the deal appeared to be the result of club owner Scott Penn interfering in the decisions being reached by the board and chief executive Stephen Humphreys.

“The decisions to me smell of naivety,” he said.

“They’re wet behind the ears decisions. They’re the decisions you make that look good on paper, but when you boil them down, they don’t make sense.”

Kent claimed it leaves Hasler being more tempted to cut corners with things like the return of star fullback Tom Trbojevic from injury.

Hasler, meanwhile, was positive about the club’s future and the stocks coming through the ranks.

Hasler said he was pleased to have reached the new deal.

“I am very glad to have the opportunity to continue working with this high calibre group of players we have now and those who will emerge in the near future through our Pathways Program,’’ Hasler said.

“I am confident of delivering further success to the Manly Club. There is a great future ahead for the Sea Eagles.”

Hasler has some peace of mind now.Source:Getty Images

He then took charge of the Canterbury Bulldogs for six years before a messy divorce, where the coach took legal action to get a $1 million payout.

Manly finished 13th on the NRL ladder last year, winning only seven games in the 20-round season.

The club has struggled without superstar fullback Trbojevic, without whom it boasts a pitiful 29 per cent win rate under Hasler’s guidance.

The Sea Eagles will next face the South Sydney Rabbitohs at Brookvale Oval on Saturday afternoon.