The Maroons have fought through strong winds and a last-minute comeback to take down a three-peat seeking NSW side at Sunshine Coast Stadium to claim their first women's State of Origin on Queensland territory.

The stage had already been set for the fiercest women's State of Origin in history, following a tension-filled NRLW grand final on October 25. 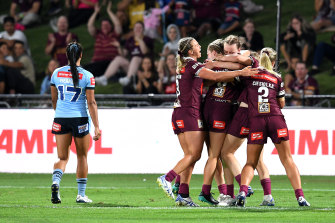 The Maroons weathered a late Blues fightback to score an emotional win.Credit:Getty

Tarryn Aiken and Upton used their Broncos combo to again find the try line for the Maroons before a try from Stephanie Hancock all but sealed the match for Queensland.

With a scoreline of 24-6, Tiana Penitani was desperate to get some points back on the board for NSW, scoring in the 60th minute to bring the scoreline to 24-10.

Both Filomina Hanisi and Botille Vette-Welsh followed Penitani's lead, scoring two tries in the final two minutes of the game in the hope of a last-minute comeback.

With just eight seconds on the clock, NSW once again fumbled under the pressure, allowing the ball to bounce over the touchline to lose the game.

One of the biggest stories of the night was Kylie Hilder, who became the oldest player in Origin history at 44-years of age after Keeley Davis was ruled out last minute with a back injury.

It was not Jess Sergis' night – with the 23-year-old tackled into touch, pushed out only by her ponytail in the 21st minute. Just six minutes later, Sergis failed to defuse a restart in one of the biggest blunders of the night, handing Queensland a line drop-out at a critical stage. Her performance on the wing lifted during the second half, but failed to get the job done for NSW.

A stellar effort came from Blues playmakers Corban McGregor and Melanie Howard, who remained calm under the pressure of the controversial dropping of last year’s halves pair Kirra Dibb and Maddie Studdon.

Millie Boyle also played strongly against her Broncos teammates, before a nasty head clash in the second half saw the 22-year-old's face dripping with blood.