Richie Myler and Ash Handley both scored hat-tricks as Leeds got their Super League play-off bid back on track with an impressive 50-12 demolition of Salford.

Myler, a former Salford and Warrington scrum-half returning from injury as a makeshift full-back, revelled on his return to the Halliwell Jones Stadium while winger Handley matched his try-scoring heroics. 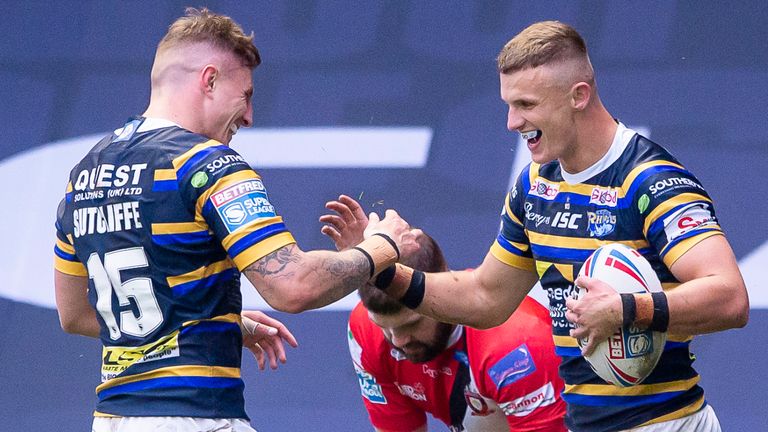 It was an emphatic response to successive defeats by St Helens and Wigan as the Rhinos completed the double over last season’s Grand Final runners-up to climb back into the top four.

The Red Devils were playing their first game for three weeks after becoming victims of Hull’s positive coronavirus tests and they looked well off the pace in the early stages as they conceded a point a minute in the opening quarter and collapsed completely towards the end.

Yet it began so promisingly for Ian Watson’s men when right winger Ken Sio produced the first break of the match,only to fail to find support – and he was badly injured as he was tackled into touch.

Leeds took full advantage of their opponents’ reshuffle by targeting that edge and reaped the rewards with Handley scoring two tries before half-time.

Centre Liam Sutcliffe, deputising for the injured Konrad Hurrell, got his man over for the opener after nine minutes and Myler, who made a lively return from injury, pounced for his first try courtesy of a blunder by defender Ryan Lannon. The Red Devils had barely recovered from the opening blows when their former stand-off Robert Lui split them wide open with a midfield break to get Leeds captain Luke Gale over for another try.

Rhys Martin kicked his second conversion to open up a 16-0 lead after 16 minutes and Salford’s misery was compounded when substitute Chris Atkin failed to touch down at the corner despite an acrobatic dive after superb work by Kris Welham and Nial Evalds had created an opening.

The Rhinos immediately took play back down the other end and Myler got on the end of a kick from Handley, who had been put free by forward Matt Prior, to score his second try.

Handley also added a second before the break, when Leeds led 26-0, and Salford suffered another injury blow when Atkin went off with a shoulder injury early in the second half.

It looked like a damage limitation exercise from then on but Salford full-back Niall Evalds gave his side renewed hope when he went over for two tries in five minutes, both converted by former Leeds stand-off Tui Lolohea.