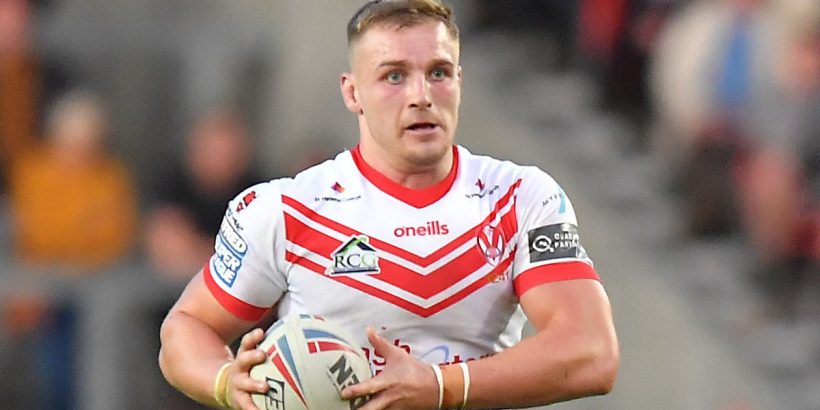 Matty Lees was sat on his parents’ couch recovering from a ruptured bowel the last time St Helens were at Wembley two years ago.

Lees feared he would suffer Challenge Cup heartache again this season when he broke his ankle against Wakefield in April. But the rugged 23-year-old prop returned to action ahead of schedule against the same opponents last weekend.

Now he is desperate to create positive memories as Saints today bid to lift the famous trophy for the first time since 2008. Lees explained: “That’s the aim, and I can use the last two years to fuel that and hopefully help make history. Sitting at my mum and dad’s in 2019 was tough, knowing I couldn’t do anything to help or change the game.

“I did the injury against Leeds a couple of weeks before, I’d got tackled on the side of my stomach and I came off feeling winded and a bit sick, but not too bad.

“I had some checks from the doctor but then felt fine and had the team talk and a shower, but then it came back and I felt really sick and they know something wasn’t quite right.

“An ambulance ended up getting called and they found I had a ruptured bowel – the scary part was not knowing how serious it was before I was operated on. It could have been life changing, that was the biggest worry, and I couldn’t do anything for three months after that.

“I came out of hospital on the Friday, watched the final on Saturday then had to go back in for another week. It was heartbreaking not being able to run out with the lads or even be at the game, but hopefully this time will be a completely different experience.”

Before then Lees had to battle back from breaking his ankle, which he was initially told would be a four-month recovery. Him and the club’s medical staff worked overtime to cut that down, and after running out against Trinity last weekend and with Sione Mata’utia suspended following that game, Lees looks set to take his place in the 17 against Castleford.

He added: “I wouldn’t have been confident of taking my spot if I’d not had at least one game. We’d hoped to have two, but then matches got called off and it’s ended up just being one.

“But I’m ready. We all know what to expect from Cas – they’ve been a really tough side for us the last few seasons. You only have to look at the 2017 Super League semi-final when they beat us – we’ll have to bring our absolute best at Wembley.”