AFL chief executive Gillon McLachlan says the league’s investigation into allegations of mistreatment of First Nations players at Hawthorn will take months, and he has not decided whether to leave his role as scheduled if it is still ongoing.

McLachlan told Fox Footy on Thursday night the AFL had drafted its four-person external panel and was now receiving feedback on its composition from involved parties. 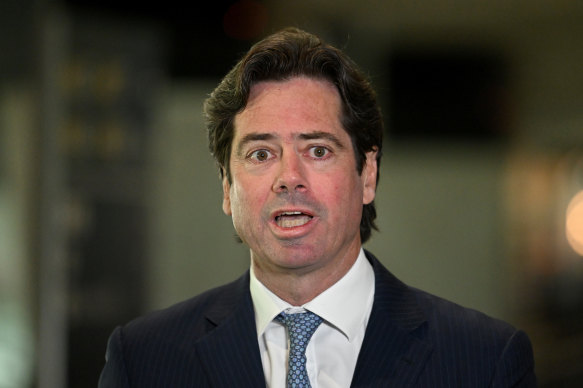 The panel will investigate separately to the league’s integrity department into allegations raised by anonymous Indigenous Hawks players which were published by the ABC on Wednesday morning.

McLachlan said he had not considered whether he would remain CEO longer than planned if the AFL panel’s investigation was still underway when he expects to step down some time after the end of the season.

He said the investigation will take months and added “there is certainly an issue about whether it would be appropriate for me to leave” while it was ongoing.

“The allegations are that serious and people’s livelihoods are at stake,” McLachlan said.

“And there are people who have suffered great trauma who need to be worked through this, and I feel that the responsibility for all this does sit in the remit of this office, ultimately. So, there’s certainly fair questions and I don’t have answer.”

The ABC reported that in an external consultants report – commissioned after allegations made by former premiership star Cyril Rioli and his partner Shannyn in The Age – former First Nations players alleged that during their playing days at Hawthorn they were told to live separately from their families, and, in some cases, forced to cut ties. One player and his partner were allegedly pressured to terminate a pregnancy.

McLachlan said the league had spoken to candidates on Thursday morning for an independent panel to investigate the allegations.

“It’s an independent panel that’ll have, obviously the right functional skills, but also diversity and I think that’s obviously cultural and gender. And we’ll work through that over the coming period,” McLachlan said.

Meanwhile, former First Nations footballer Andrew Krakouer – who experienced racism alongside Heritier Lumumba during his playing career at Collingwood, spurring the club’s Do Better report – said he felt “triggered” and “sick to his stomach” after hearing the Hawthorn allegations.

Speaking on the AFL website’s Indigenous Yokayi Footy program, Krakouer said allegations that partners of young Indigenous footballers were told to have an abortion were particularly painful to read as he started a family at 16.

“The thing that stuck for me is I had a young family. I was 16 when I had my first daughter. So for them to be able to say what they spoke about, it was really hard to listen to,” said a visibly emotional Krakouer.

“I would choose my family over footy every any day of the week if that was the opportunity I had to choose from back them. I do it and I’d do it today. So, it’s triggering and it’s hard to talk about.”

Krakouer called racism a “public health issue” and called on both society and the AFL to address it.

“Racism continues to disempower our Aboriginal and Torres Strait Islander men and women. And this is proven through the continued mistreatment of our men and women and their families within the AFL affecting our ‘wirin’ – our spirit – and taking away our sense of pride and dignity as a strong cultural men and women as a people,” he said.