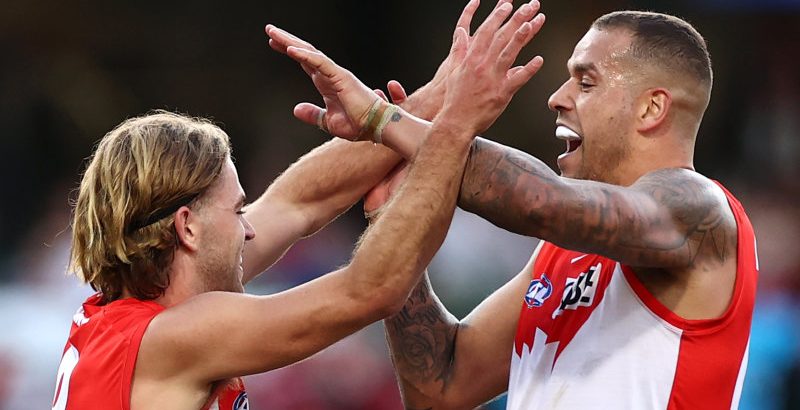 Sydney’s new breed pulled a leaf out of the old school Swans’ playbook, pulling out a win that was full of substance and meaning to land another heavy blow on St Kilda’s finals chances.

The Saints’ inaccuracy in front of goal has been one of the many blights on their season and on Saturday it came back to haunt them again. 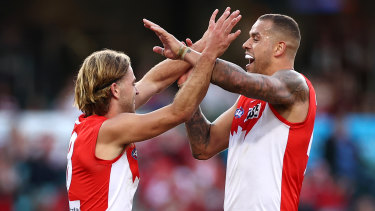 James Rowbottom and Lance Franklin celebrate the match-sealing goal in yesterday’s nine-point victory over the Saints.Credit:Getty

Jack Higgins had two chances in the closing minutes to be the hero for his side but lost his nerve when he needed it most, allowing the Swans to edge over the line by nine points 13.14 (92) to 12.11 (83).

The difference between the top eight sides and the challengers is often marginal, with small mistakes having huge consequences. The final few plays of the game was a case in point.

At one end, Higgins could not convert his set shot from 40 metres out – his miss the exclamation mark on his return of 1.6.

From the kick-in, the Swans moved the ball up the field to find Lance Franklin, who resisted the temptation of a low percentage shot from the boundary line. If he missed, he would have presented the Saints with one last chance to mount a coast-to-coast play for a winning goal. 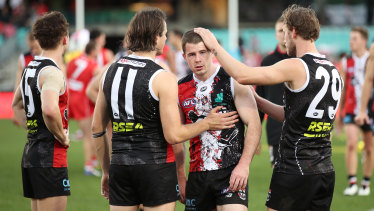 Jack Higgins is consoled by teammates after the loss to the Swans.Credit:Getty

Instead, displaying all the experience of a 300-game player, held on to the ball and waited for an option to present inside, leading to James Rowbottom’s sealing goal.

The loss is a crushing blow for the Saints, who played with plenty of spirit and fight only to shoot themselves in the foot.

Crunched early in the clearances, they fought back in the second half to draw level, and also shaded the Swans for contested ball.

It will be of little consolation for Higgins, who cut a forlorn figure after the game despite being one of St Kilda’s best players.

The loss leaves the Saints with a 5-7 record after 12 matches and a woeful percentage that effectively wipes out a win.

The Swans have transformed into one of the more entertaining sides to watch in 2021 but this performance was more about effort than style.

The free-flowing play that has characterised their season was missing against a Saints side which closed their space through the corridor.

When the game was there to be won, the efforts came from their leaders. Josh Kennedy had just 14 disposals, but kicked a vital goal in the last term.

Quiet in the first half, Callum Mills was influential thereafter, with 18 of his 26 disposals coming after half-time.

Beaten by 50 points or more four times already this season, the Saints were in early trouble when the Swans scooted 21 points clear but, instead of waving the white flag, this time they dug in.

Their execution was far from perfect but their application could not be faulted. Jack Steele and Brad Crouch were getting the better of Parker and Kennedy while Brad Hill was enjoying not having the close checking of a tagger.

The Swans lifted their intensity after half-time and for about 15 minutes had the Saints holding for dear life.

Their drive was coming behind the ball from Jake Lloyd, who had plenty of space running out of defence and was also prepared to plant himself in the hole in front of the leading forwards when needed.

The duel in the ruck between Tom Hickey and Paddy Ryder was fascinating. Ryder dominated the hitouts but the Swans were dominant in the clearances, and Hickey, returning after a week out with a knee issue, had a greater presence around the ground.