Collingwood key defender Darcy Moore hopes that the Magpies select veteran forward Ben Reid in the preliminary final, on the grounds that Reid can "have a real impact" on Saturday.

Reid would replace Jordan De Goey, as the hamstrung star holds out hope that he can be fit for the grand final if his teammates overcome Greater Western Sydney. 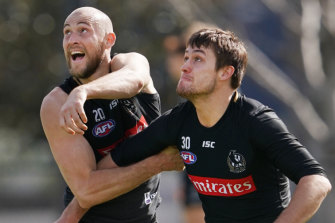 "We've obviously got a few decisions to make … with Ben Reid potentially coming in, who's absolutely flying on the track," Moore said on Monday.

"We'll see what happens, I hope he puts his hand up and gets picked because I think he can have a real impact for us in these last couple of games."

After returning from Germany where he sought treatment for his hamstring, De Goey trained lightly on Monday, but will not play against the Giants.

GWS star midfielder Stephen Coniglio trained strongly in recent days and has improved his prospects, but is seen as highly unlikely to feature in the preliminary final.

The Pies will have at least two forced changes, with De Goey and tough utility Levi Greenwood (knee) both ruled out.

Travis Varcoe, Matt Scharenberg, James Aish and Ben Reid are all in the mix for selection, with Collingwood's match committee having access to a relatively healthy squad at the pointy end of the year.

Magpie fans would have enjoyed the sight of  De Goey taking to the training track with his teammates on Monday, but he was quickly ruled out.

"Most guys who do a hammy, they sort of get going at this stage anyway. I don't think he'll play this weekend, I think Bucks already ruled that out," said captain Scott Pendlebury.

"So we won't have him this week and we need to take care of this week otherwise he's done and we're done."

While in Germany, De Goey spend time with hamstring specialist Hans-Wilhelm Muller-Wohlfahrt, as he tries to cut down his rehabilitation time in a bid to be fit for a possible grand final.

The Giants comprehensively defeated Nathan Buckley's side in their last encounter back in round 18, winning by 47 points.

"That day we played them up there, it was game over basically by quarter-time," Pendlebury said.

"We've really got to make sure there's pressure on the footy. They're a very good clearance side and contested footy has been a big staple of theirs for a long time.

"We need to match that heat and then surpass it and try to get the game on our terms."

But the Collingwood team that will lines up on Saturday will be significantly different to the round 18 side that succumbed at Giants Stadium.

Flynn Appleby, Ben Crocker, Mason Cox and Isaac Quaynor – in just his third senior game – all played and the Magpies were stretched for height, particularly in defence, where mid-sized Appleby was forced to man the far taller Finlayson.

Moore did not play, and nor did Jaidyn Stephenson, Jamie Elliott and John Noble.