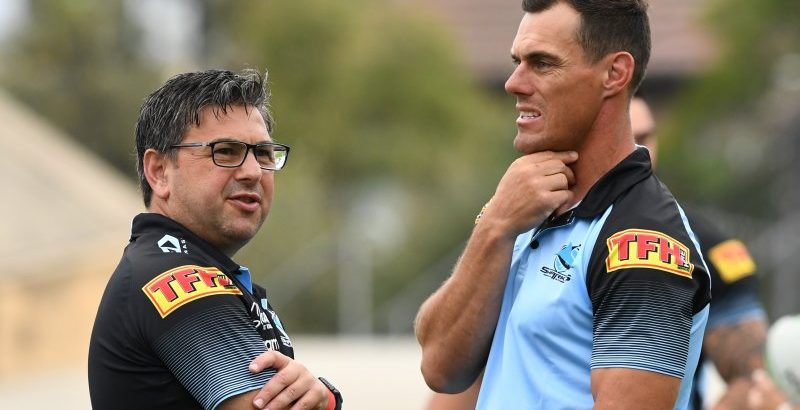 In war, the reckoning is always that for every person on the front line it takes five in the supply chain to keep them going. In professional football, generally, it’s closer to two-on-one in terms of key people.

That is, for every footballer on the field you need a couple in the back-office – including the coaching and medical staff, the baggage people and masseurs, the sponsorship and ticketing managers etc – to be performing well for the team to triumph on the field. For the coach, the two most important people whose direct role it is to support him are the club chairman and CEO. 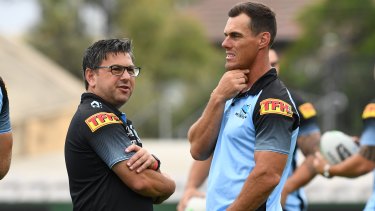 All of which puts into stark relief just how brilliantly John Morris did as Sharks coach to get them into the finals for the last two years running, despite having an unreliable management team behind him!

Morris, as you know is the former Cronulla player who after 300 NRL games, 105 for the Sharks, became a development coach for the club and so highly regarded was he that he collected the under-20s coach of the year award in 2017. At the beginning of 2019 he became Cronulla’s head coach, and got them to the finals for the next two years, while noted for being hard-working, highly regarded by his own players, and a fellow who had the key capacity of being able to get his players to bleed for the jersey, just as he once had – right up to the point he was effectively sacked on Tuesday!

Let’s go back a little.

In March last year, Dino Mezzatesta quit as chairman of the Sharks to become the club’s CEO, while his previous deputy chair, Steve Mace, took over as chairman. Within a couple of months, there were rumours they wanted to get rid of “Bomber” Morris whose contract was to expire at the end of this year.

They both robustly denied such rumours at the time.

“Bomber is our coach, he is our coach this year, he’ll be our coach next year,” Mezzatesta said. “Of course he has our support, we are a team and we support each other … I couldn’t be any clearer in that comment.”

For his part, Mace later said: “Our culture is we’re no longer a football club, we’re a football business”.

But look, in business there still has to be candour doesn’t there?

And here we are getting to the nub …

For even while Morris was succeeding in getting the Sharks to start to look the goods on the field, he had to contend with mixed messaging from the chairman and CEO, who were nevertheless publicly proclaiming their support.

When reports circulated that Cronulla was looking at Eddie Jones to take over, Mezzatesta denied it: “That contract is in place today and we have a job ahead of us. As a group and a team, we are committed to this place and we all have a job we do in our little environments. The guy is on contract and there’s no way I’m speaking to anyone else. He’s on contract until the end of next year. If anything, those discussions don’t take place until the end of the year because I’m sure, for his benefit, he’d like to know for next year and beyond.”

And so it went, right up until at last Sunday, when a decision on Morris’s future must have been made, when Mezzatesta was quoted: “Bomber [Morris] is still our coach and we have not signed a deal with anyone.”

By Tuesday, though? Morris was gone. And Mr Mezzatesta was wringing his hands.

“However, in announcing the appointment, we need to acknowledge the contribution John Morris has made at the Cronulla club as a player, development and 20s coach, NRL assistant, and as our head coach in 2019-2020 and to this point in our 2021 season. As coach, John has brought through a number of promising youngsters to where they are now performing at an NRL level, his work ethic can’t be questioned and there is little doubt he has a bright future as a coach in the NRL. We certainly wish him future success.”

Mighty big of you, Tex.

Anyway, you get the drift. The whole thing was complete and utter debacle, a text-book example of how not to run a club.

I feel sorry for two people.

Firstly for John Morris. Just imagine what he could have achieved with support?

And secondly for Craig Fitzgibbon.

The former Roosters winger and now assistant coach is by all accounts a good man with a great football brain, who has served a long coaching tutelage under Trent Robinson. Great things are predicted for him.

But mate, look at the back office you are inheriting!

You will recall the famous line, “Marry your mistress, and you create a vacancy”, the point being that the mistress can hardly expect fidelity as a wife when she herself had arisen to the position through infidelity.

My question to you, Craig Fitzgibbon:

You have become Sharks coach through a chairman and CEO who have not been completely up front with their own bloke. How can you expect they will be better with you, and give you the support you will need to succeed?