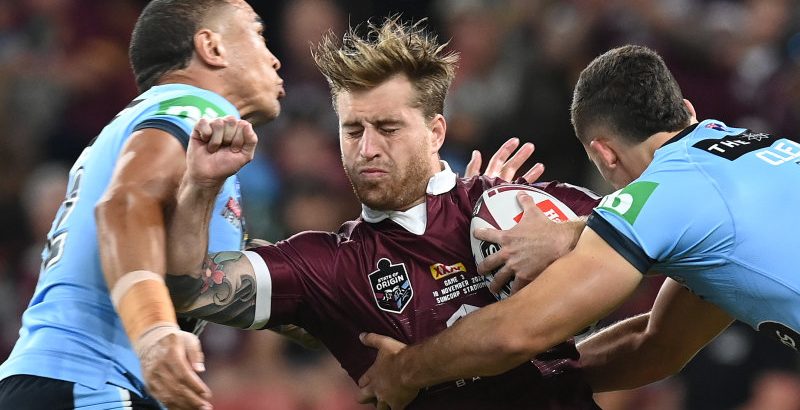 I won’t lie: Cameron Munster absolutely terrifies me. He’s a rugby league rock star. The bigger the stage is, the higher the stakes are, the louder the crowd gets, the better the Storm five-eighth seems to go.

He has incredible self-confidence and always backs himself. He brings so much creativity to any side he plays for – yet another champion wearing the Queensland No.6 jersey. 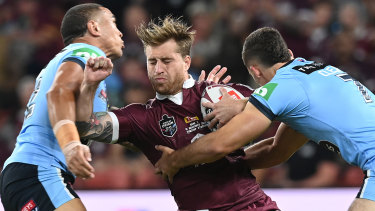 Wally Lewis Medal winner Cameron Munster had a night to remember for Queensland in the series decider last year.Credit:Getty

NSW’s attack is led by the combinations formed at the high-flying Panthers between halfback Nathan Cleary, five-eighth Jarome Luai and lock Isaah Yeo.

I’ve been at Blues training a few times this preparation and Yeo has been a real standout. Watching him from close range has made me realise just how big he is. At 195cm and 108kgs, he’s imposing.

The link role he plays as the modern-day No.13 has also impressed me. His ball-playing ability frees up Cleary. And Cleary frees up Luai, who is on debut. 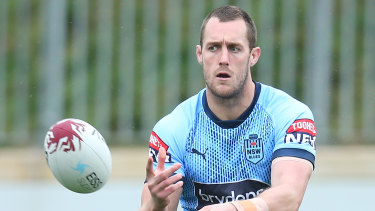 These combinations are a huge advantage for NSW because the trio know each other’s game so well.

They will also provide plenty of points. I reckon you’ll need to score upwards of 24 to win this Origin.

The battle of the middles will rock the stadium. Queensland’s Tino Fa’asuamaleaui, Moeaki Fotuaika and Jai Arrow come up against Daniel Saifiti, Jake Trbojevic and Payne Haas. I can’t wait.

The Blues’ middles are a lot bigger but Queensland’s are also very mobile and they play big minutes. 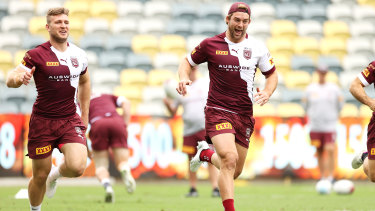 Christian Welch, right, is unafraid of doing the unglamorous work.Credit:Getty

The other Queensland player I love – there’s a line I never expected I’d say – is prop Christian Welch. He leads the NRL in offloads with 32 and that provides unstructured, ad-lib footy that’s so hard to defend against.

I like that he’s out of the Storm regime where there’s an overriding team-first attitude.

He does all the tough, dirty work that nobody sees but, without someone doing that work, the likes of Munster and Daly Cherry-Evans and Valentine Holmes can’t work their magic. 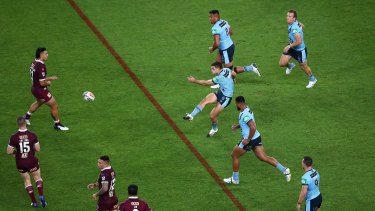 Queensland had no answer to Nathan Cleary’s kicking game in Origin II in 2020. Credit:NRL Photos

The other intriguing match-up is the battle between Cleary and Queensland’s back three.

Last year in game two, which the Blues won 34-10, Cleary kicked the Maroons to death. Queensland have an inexperienced back three again: Winger Xavier Coates has played just two matches while Kyle Feldt is on debut. Holmes is still unfamiliar at fullback at this level.

How that trio works together, to catch those Cleary kicks on the full, will be a huge factor. 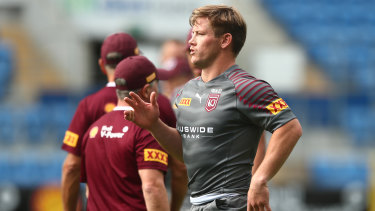 Harry Grant will shake off any rust in the Origin arena.Credit:Getty

The injuries to Queensland’s key men, Munster and hooker Harry Grant, mean they haven’t played for around five weeks. It doesn’t matter. I actually think it works in their favour.

As we saw last year, Munster can play injured. He had a grade-five tear of his liver and kidney, playing hungover from the Storm’s grand final celebrations.

He still went on to win the Wally Lewis Medal as best of the series. If that isn’t an old-school player, what is?

The break away from the NRL is a positive for Queensland because physically and mentally Munster and Grant will come in fresh.

Welcome to the bunker

I feel so much for the officials in this match. I don’t want them deciding who wins the game and I bet they feel the same.

To put them under so much pressure, where they have to decide on the spot what constitutes “forceful contact” is just not fair.

How much pressure will the feral crowd and unique atmosphere of playing in Townsville put on referee Gerard Sutton?

How will he officiate this match? Will the Bunker impose itself on Origin footy? Will they continue to rule like they have been in club-land? Or will they keep out of it? 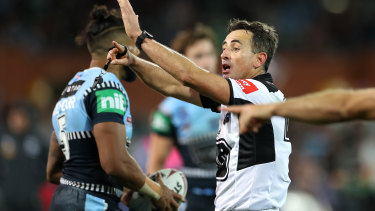 Will Origin duty be a poisoned chalice for Gerard Sutton?Credit:Getty

The game has gone in the blink of an eye from celebrating heroic feats on the field, from players fearlessly playing on through pain and injury, to some of them laying down to milk a penalty.

I heard Daly Cherry-Evans talking about a “gentleman’s agreement” with the Blues to not lie down. I’ve never heard so much rubbish in my life heading into an Origin.

We used to joke about other sports and the way players take dives. Now, it’s infecting rugby league.

I can only imagine what people like Les Davidson, Steve Roach and Paul Harragon think of all this.