I can clearly recall the song Welsh-born Mary Hopkins sang in 1968. The lyrics tell the story of the time: "Those were the days my friend. We thought they'd never end. We'd sing and dance forever and a day."

It still seems like yesterday and by a quirky fate I was in the middle of it. How did this Geelong player get tangled up in all of this? The truth is I wasn't tangled but I watched from close range and bled for my new mate. 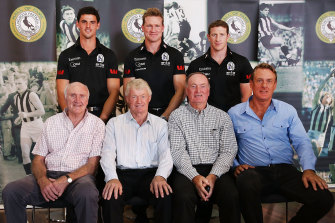 Terry Waters, front left, with Collingwood greats past and present in 2014. Credit:Getty Images

Late in 1969 I was playing with the Cats, working and living in Melbourne and looking for a new flat and flatmate. My old one had moved on and through a friend of a friend I discovered that Collingwood star Terry Waters had a spare room in Avoca Street, South Yarra. I'd only seen Terry on the field and admired his skills and agility. We knew each other by name only but the rent was cheap, the room was huge, the location was perfect, and he seemed OK for a Collingwood player.

In fact, it was around that time that Des Tuddenham and Len Thompson put it on the club for more pay and Tuddy lost the captaincy. I was now flatting with the new Collingwood captain. Tuddy and Thommo played on. 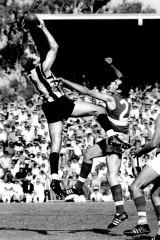 Terry Waters, left, in action against Footscray in 1971. Credit:The Age

If you saw the flat you would understand why the rent was cheap. You would also understand why Tuddy was wanting more money. Footy back then didn't lead to anything grandiose. Quite the opposite. Everything was old in appearance and practicality. The carpet was threadbare and a layer of dust had filled the gaps. When Irish the resident red setter couldn't sometimes make it to the door in time the result was untraceable on the carpet. We discovered the hard way.

As the year went on, Terry and I became good mates. First and foremost Terry Waters was a great bloke. Usually on a Saturday morning we would take turns to cook breakfast. The kitchen was a disaster zone, but our cooking didn't devalue it in any way. We would then go out in the backyard and start handling the ball. Short kicks, handpasses, baulking each other and taking the total mickey out of each other.

In round 15 of July 1970 we were due to play each other at Victoria Park. Geelong were sitting fifth and Collingwood first. A crackerjack game was expected and Terry and myself went into our caves. I was playing well at the time and eventually came runner-up for the season with Geelong.

On the Thursday night I went down to Geelong to train and Terry trained with the Pies. Being captain, he sat on the selection committee as was done those days at some clubs. They sat after training.

We arrived back in South Yarra later that evening and Terry said: "We've got a special plan for you, Andrews." I didn't give it a thought.

Come Saturday morning, the stand-off continued. About two hours before the game he asked me how I was getting there. I said "by car" knowing that I'd be parking about a mile from the ground. He had the prime position beside the entrance gate. He reluctantly said I could come with him.

Somewhere well short of Johnston Street and the ground, he pulled over and asked me to get out. He didn't want anyone to see him with me. I might as well have driven.

A big crowd was in and the toss proceeded between the two captains – Terry Waters and Bill Goggin. I took my starting position and just before the siren was sounded, my flatmate walked up beside me and in his flattest, cheekiest voice said, "I'm the special plan".

The Pies won by 29 points. I've just discovered that Geelong had me as second best for them on the day. Terry didn't figure. I'm glad I couldn't ever tell him that. He wouldn't believe it.

We remained long-term mates. Twice I almost lost his friendship as I asked both Terry and Teddy Hopkins – of 1970 grand final fame (or infamy from a Magpie view) – to be guests on a function table. Teddy had become a mate of mine, but Terry hadn't become a mate of Teddy.
Terry loved Collingwood and the whole Magpie army loved Terry. Terry never forgot where he came from and was proudly a Dandenong boy to the end. Family, friends, workmates and old flatmates were all blessed and plain lucky to be part of his life.

NBA bubble breakdown: Giannis Antetokounmpo calls Luka Doncic ‘one of the most talented guys I’ve ever played against’

Watkins OK with less money to win with Chiefs