Essendon coach John Worsfold has fired back at critics of the players' decision to tell a half-time joke against Geelong and insists the Bombers have made strong progress amid a new game plan and a list "decimated" by injury.

The Bombers, in 12th spot, have been under fire this week after their finals aspirations were all but ended with two rounds remaining, completing a largely miserable season where a lack of understanding about a new game plan has often been used as a factor in their woes. 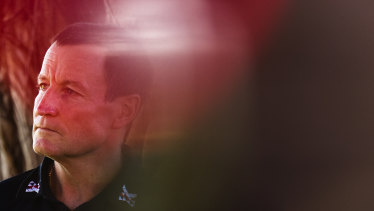 "There has been a lot of factors that have meant we haven't got a couple of extra wins that we would have liked this year. But the No.1 thing is to learn from that, learn from why we haven't been able to get our best team on the park and have maybe six or seven of players unavailable week to week," he said on Thursday.

"If we address that and Ben has his best squad available, we have made massive inroads. Ben takes over a team that is 12 months into a new game plan, not Ben having to start from scratch next year, so that is a massive step forward for the footy club.

"We haven't been able to practice it and train it as much as we would like due to the circumstances this year but the players have a really strong understanding to what they are working towards.

"The improvement in young players in [Jordan] Ridley and [Andrew] McGrath in new roles this year has been outstanding. I think everyone is really clear in the way the side is starting to shape up and how it's going to look as the group plays more footy together and matures into what should be a really strong squad going forward."

Lloyd also took aim at Heppell for allowing first-year player Irving Mosquito to tell a joke to the players after the half-time break before they ran out, despite the Bombers facing a 10-goal deficit to the Cats at the time.

This relaxed manner has been one factor in Richmond's success over the past three years, which has led to two premierships. Rutten and assistant coach Blake Caracella joined the Bombers from Punt Rd.

"We measure the players on performance. I thought their second half, if telling that joke got them up and played the footy they played in the second half, we had more scoring shots and inside 50s than Geelong, then we should have been cracking those gags before the game," Worsfold said.

"People are going to put perspective on it. Again, it's a very narrow focus in the context of what players are doing. We can pick on players' group at any time. We want the AFL to have some characters in the game. But ultimately we get measured on performance.

"Our first half wasn't good enough. The players having a laugh post that and then going out and performing a lot better, people can read into that how they want. For me, we get measured on our performance. That's what we want to go on.

"If people want to use facial expressions or other actions as a measure of that, I can't control that. People don't know what happened at half-time. They saw 15 seconds of something – there was a lot more that went on at half-time from coaches and from the leadership group with the players. It was very focused, very driven around improving our performance in the second half."

Worsfold said Lloyd was entitled to his opinions but added: "I am not sure he garnered any support with those".

"That's his job as a commentator, not a journalist as I understand, don't expect him to make journalistic comments. He is just an opinion maker. He is welcome to do that if that's the way he feels," he said.

Worsfold said Lloyd's comments did carry extra weight as he was a former Essendon player "but he is not making them as an Essendon champion. He is making them as someone who has to earn his pay so he needs to do that."

The Bombers face the Power at Adelaide Oval on Saturday and need to win their final two matches – they play Melbourne in round 18 – and rely on other results going their way to have any chance of finishing in the top eight.

Worsfold said Joe Daniher will return from a week off and gave supporters confidence the key forward may sign a new contract because of his strong relationship with Rutten.